'Arkansas' will keep you in suspense. 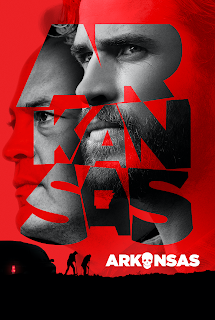 Arkansas is on Apple, Amazon, and On Demand platforms on May 5th, 2020.

Kyle (The Hunger Games's Liam Hemsworth) and Swin (writer/director Clark Duke, who you likely recognize from Hot Tub Time Machine) are on the bottom rung of the ladder in a Southern drug ring run by a mysterious man named Frog, who they've never met--or have they? John Malkovich gives a great performance as their off the wall boss, whose cover is a park ranger. Piscatella from Orange is the New Black makes an appearance. Vince Vaughn is in there taking a serious turn. Duke cast his younger brother, too, as a maniacal big-man.

I want to say on the outset that I enjoyed this movie. Were there more than enough scenes of people surreptitiously trading money for drugs? Yes. Was Liam Hemsworth typecast as the strong, silent type? Yes. Were there several scenes that got so violent I was yelling and/or cursing at the screen? Yes. Be glad you didn't have to watch this in the theater with me!

Despite its flaws, this film kept me in suspense. Aided by a quality soundtrack provided by the Flaming Lips, I found myself engaged in the plot and the mystery. Much to my surprise I even found myself pulling for the characters, who think they have nothing to lose until it's too late. As Swin says in the beginning, "everyone who meets me wants to be my friend."

Joanna Connelly (Guest Contributor) was born and raised in Metro Detroit. A fan of thought-provoking thrillers and indie films, she also enjoys a good chick flick. When not at the movies, she can be found running, reading, or writing bar trivia.
Click Here to check out Joanna's Articles.
Posted: May 05, 2020
Labels: JoannaConnelly20, Reviews20
Newer Post Older Post
Subscribe to: Post Comments (Atom)
Subscribe to Mind on Movies for Movie Screenings and Giveaways.