'The Invisible Man' is an Agonizing Game, You Can't Stop Watching! 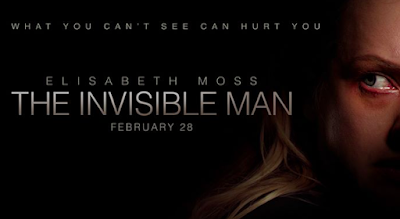 - Read Ashley's review of The Invisible Man. What you can't see can hurt you. Emmy winner Elisabeth Moss (Us, Hulu's The Handmaid's Tale) stars in a terrifying modern tale of obsession inspired by Universal's classic monster character.

Trapped in a violent, controlling relationship with a wealthy and brilliant scientist, Cecilia Kass (Moss) escapes in the dead of night and disappears into hiding, aided by her sister (Harriet Dyer, NBC's The InBetween), their childhood friend (Aldis Hodge, Straight Outta Compton) and his teenage daughter (Storm Reid, HBO's Euphoria).

But when Cecilia's abusive ex (Oliver Jackson-Cohen, Netflix's The Haunting of Hill House) commits suicide and leaves her a generous portion of his vast fortune, Cecilia suspects his death was a hoax. As a series of eerie coincidences turns lethal, threatening the lives of those she loves, Cecilia's sanity begins to unravel as she desperately tries to prove that she is being hunted by someone nobody can see.

Jason Blum, our current-day master of the horror genre, produces The Invisible Man for his Blumhouse Productions. The Invisible Man is directed and executive produced by Leigh Whannell, from his screenplay and screen story. Whannell is one of the original conceivers of the Saw franchise who most recently directed Upgrade and Insidious: Chapter 3. 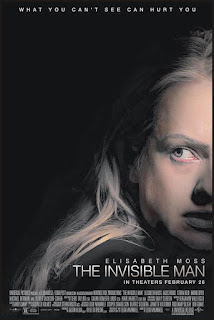 The Invisible Man stars Elisabeth Moss as Cecilia Kass, a woman escaping her abusive boyfriend. He commits suicide and leaves her a large sum of his fortune. Kass begins to experience life as if her abuser is still following her and questions the validity of his death. She sets out to prove he is still alive which leaves those around her wondering about her sanity. Can this modern remake of an old monster bring new flair to the story?

This film takes suspenseful sci-fi to another level. It is easy to think that it’s going to be another cheesy movie that is predictable but the twists and turns prove otherwise. I heard audience members gasp audibly multiple times throughout the movie because of the curveballs they throw into the plot. The camera angles are another element that add to the curveballs. Some of them are so awkward that I found myself frantically searching for something, similar to what Kass was feeling. This added a bonus effect of fear which was perfect for the film.

Elisabeth Moss’ performance was another element that truly set this movie into a top tiered suspense. The film is set up as if you are engaging from her point of view. The torment she begins to experience transfers to the audience because of how authentic her fear and desperate to prove her ex is still alive is. The uneasiness of her sister and friends trying to understand why Kass is adamant about her dead ex stalking her is effective. It brings the reality factor back which adds to the tug of war game of is Kass telling the truth or suffering from a dwindling mental state?

The Invisible Man brings a classic monster movie into modern day. The transformation is nearly flawless in execution because of the fear it provokes. It is like a agonizing game that you cannot stop watching yet worth every second.