'Underwater' This One Tanks

- Read Ashley's review of Underwater. A crew of underwater researchers must scramble to safety after an earthquake devastates their subterranean laboratory. 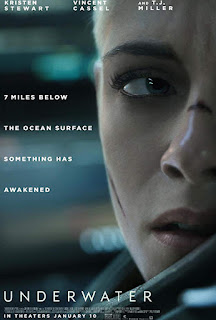 Kristen Stewart plays Nora, an underwater engineer who’s station suddenly starts to become undone. As she runs for her life and attempts to escape, she meets other survivors and finds out the truth about what really brought their station down.

I actually thought this movie would be better than what it was. T.J. Miller was pretty funny and definitely the best part. Jessica Henwick (Iron Fist) plays Emily, a scientist and her character was just annoying, the writers did a horrible job making her seem “relatable”. Kristen Stewart has the same delivery that she’s had since Twilight - Unfortunately there is nothing new about her acting skills.

This movie is not good - BUT I was pretty entertained, it maintains a steady pace and keeps you on your toes, lots of jumps! I think some people will like it, especially if this is their niche.