'Jumanji: The Next Level' Not as Great as I Expected - Ashley's Review 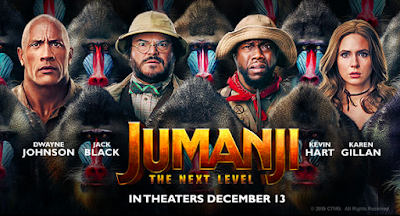 - Read Ashley's review of Jumanji: The Next Level. In Jumanji: The Next Level, the gang is back but the game has changed. As they return to Jumanji to rescue one of their own, they discover that nothing is as they expect. The players will have to brave parts unknown and unexplored, from the arid deserts to the snowy mountains, in order to escape the world’s most dangerous game. 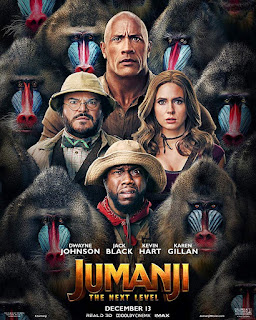 The gang is all back for the sequel to the very successful movie, Welcome to the Jungle. Karen Gillan, Dwayne Johnson, Jack Black and Kevin Hart all return and once again find themselves trapped in a video game. New to the cast is Danny DeVito and Danny Glover.

Karen Gillan returns as Ruby Roundhouse and takes the lead in this film. She’s clearly the star of the movie and had the most scenes. I wasn’t buying Dwayne’s performance, his accent missed the mark and it sounded very strange. There’s a very cool scene towards the end with a mythical creature and that was really awesome to see.

I think what bothered me the most was the characters switched who they were in the game. So it was pretty weird since I was expecting the same avatars from the first movie. When they went back into their original characters I definitely perked up and enjoyed it more.

I didn’t think the movie was as good or funny as the first, they tried to hard with some of the jokes and they just fell flat. It felt kind of long and dragged out. With that being said I still enjoyed it somewhat and I’m not opposed to another movie.