Enter to Win Game of Thrones: Season 8 on Bluray! 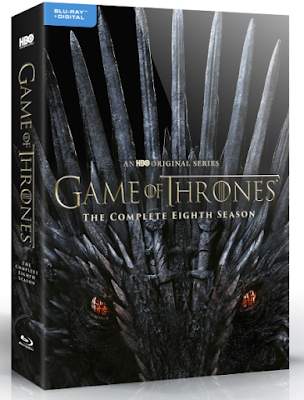 Game of Thrones: Season 8 on Blu-ray also exclusively features:
· Game of Thrones: The Last Watch: A documentary featured on DVD in two parts by filmmaker Jeanie Finlay chronicling the making of the final season.
· When Winter Falls: Exclusive 30-minute featurette with showrunners David Benioff and D.B. Weiss, along with major stars and behind-the-scenes players, breaking down all that went into the colossal filming of the “Battle of Winterfell” in Season 8, Episode 3.
· Duty is the Death of Love: A compelling look at how the team behind Game of Thrones and its major stars, including Kit Harington, Peter Dinklage and Emilia Clarke, brought the show to its conclusion in the series finale, “The Iron Throne.”
· Audio Commentaries: 10 Audio Commentaries with cast and crew, including the show’s creators, Benioff and Weiss, on the final season.
· Deleted and Extended Scenes: 5 never-before-seen deleted or extended scenes from season 8.
· Histories and Lore: New animated pieces giving the history and background of notable season 8 locations and storylines.
Game of Thrones: Season 8 is on Blu-ray on December 3rd, 2019.
Posted: November 21, 2019
Labels: Expired Contests
Newer Post Older Post
Subscribe to: Post Comments (Atom)
Subscribe to Mind on Movies for Movie Screenings and Giveaways.