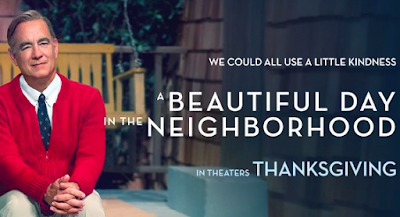 Read Nikki's review of A Beautiful Day in the Neighborhood. Tom Hanks portrays Mister Rogers in A Beautiful Day in the Neighborhood, a timely story of kindness triumphing over cynicism, based on the true story of a real-life friendship between Fred Rogers and journalist Tom Junod. After a jaded magazine writer (Emmy winner Matthew Rhys) is assigned a profile of Fred Rogers, he overcomes his skepticism, learning about empathy, kindness, and decency from America’s most beloved neighbor. 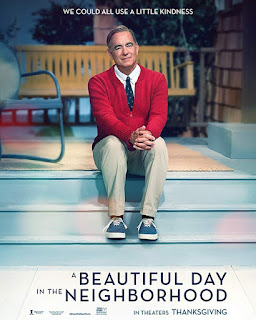 A Beautiful Day in the Neighborhood is in theaters on November 22nd, 2019.

‘A Beautiful Day in the Neighborhood’ comes out this weekend! Like me, I’m sure there are many excited for this movie. Fred Rogers is such a great person, I’m such a huge fan and can say he is one of my favorite humans ever, alongside with Tom Hanks. That being said as soon as I heard there was going to be a movie about Fred Rogers being played by Tom Hanks, I was super excited I could have cried. I was such a huge fan of the documentary ‘Won’t You Be My Neighbor.’ I thought it was fantastic. I was super hyped and excited for this one. However, marketing can be a funny thing that will eventually lead to being somewhat disappointed.

This movie was based on true events and inspired by a magazine article written in 1998. Surprisingly, this movie tells the story of a jerky-New York reporter named Lloyd (Matthew Ryhs) who is picked to interview Fred Rogers (Tom Hanks). This soon becomes an unexpected friendship as Lloyd manages to reconnect with his difficult father and his newborn son. THIS IS NOT A BIOPIC,OR EVEN MUCH ABOUT FRED ROGERS.

Honestly, the trailers made it seem this story was going to be about Fred Rogers life, or at least some behind the scenes around him. Due to that fact, I came out of the theatre feeling disappointed. I really feel like the writers had created a story about a father/son relationship, tried to figure out how to get people to see it and knew that a character such as Fred Rogers would really get people to go out and watch it, so they put him in the story. Fred Rogers wasn’t in it as much as I imagined her would. This movie is not about Fred. It’s about Lloyd.

I will say, I really liked how some of the film was made. I enjoyed the animated depictions of the toy Neighborhood along with the way they had the camera format switches to give it more of an old school portrayal of the tv show. Tom Hanks was amazing, as usual. As much as Fred and Tom don’t look at all alike, Tom really did well with playing him and sounding like him. I won’t lie though, I was quite bored in basically any scene Fred Rogers wasn’t in. I almost fell asleep three times, which stinks, because I really wanted to like this movie. It seemed like a very basic movie, I guess I can say. It was a typical movie about a father/son relationship. Only difference is a very kind soul was trying to help mend the relationship. Yes it’s a nice movie about being kind, but it really didn’t effect me or make me want to watch it ever again.

If you want to see a tear jerker film about Fred Rogers, I would recommend the documentary ‘Won’t You Be My Neighbor.’