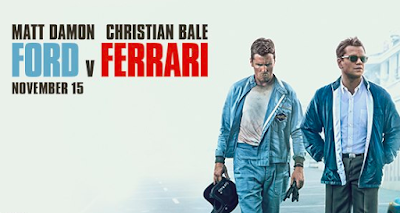 Read Nikki's review of Ford v Ferrari. Academy Award®-winners Matt Damon and Christian Bale star in FORD v FERRARI, based on the remarkable true story of the visionary American car designer Carroll Shelby (Damon) and the fearless British-born driver Ken Miles (Bale), who together battled corporate interference, the laws of physics, and their own personal demons to build a revolutionary race car for Ford Motor Company and take on the dominating race cars of Enzo Ferrari at the 24 Hours of Le Mans in France in 1966. 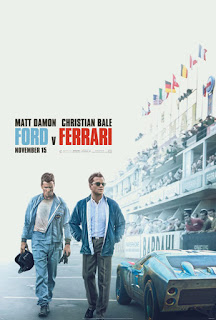 Ford v. Ferrari officially hits theatres this weekend! I will say, when I first heard of this movie, I didn’t really have much of an interest to it. I don’t care about cars, I don’t even know much about them, let alone race cars, so I thought I would be bored watching this. However, I was highly satisfied and watched this movie very intrigued with what would happen. If your a car enthusiast, you will definitely enjoy and have a blast watching this movie.

This movie is set during the 1960’s. the Ford brand wanted to start making race cars so they can boost their brand appeal and beat the brand Ferrari, which is the brand they tried to merge with. Henry Ford hires a guy named Carol Shelby (Matt Damon) to build him the best race car money can buy. Carol Shelby then asks his British driver friend, Ken Miles (Christian Bale) to help them.

The movie is very long, 2 hours and 30 minutes. But it gives us more than enough time and background into the lives and races of Shelby and Ken. Bale and Damon work really well together. The film wouldn’t be as great without them. Damon does a very well leading performance while also giving Bale his chance to shine. This is an underdog tale and shows us the passion of racing as seen from Ken Miles. Christian Bale portrayed him so well, a man who loves nothing more than racing and cars. But is looked down upon in Ford. I love Christian Bale and the way he plays Ken. In every scene he’s in he gives us so much confidence and humor while also seeing his frustration and struggle as he tried to prove people wrong despite his background.

The action in the movie was incredible. From start to finish I was hooked. It was very loud, fast and vivid. You definitely feel like you’re in France for the Le Man’s race. I didn’t even view this movie in an IMAX theatre, and it was incredible. I can only imagine how it must sound in those theatres. The cinematography is stunning. The movie had a 60’s feel to it that many movies can’t capture.

Even if you don’t care about cars or car racing, I feel this is still a very entertaining film. It brings passion, drama, comedy and shows a very strong bond between two lead characters. I’m sure we’ll be seeing this film during Oscar season!