Broadway In Detroit is pleased to announce that the North American Tour of A BRONX TALE, the new musical featuring a book by Academy Award nominee Chazz Palminteri, music by Oscar, Grammy, and Tony Award winner Alan Menken, and lyrics by Grammy Award winner and Oscar and Tony Award nominee Glenn Slater will play Detroit’s Fisher Theatre, January 21 – February 2, 2020.
Tickets start at $39 and can now be purchased online at www.broadwayindetroit.com or www.ticketmaster.com, and also by phone at 800-982-2787. 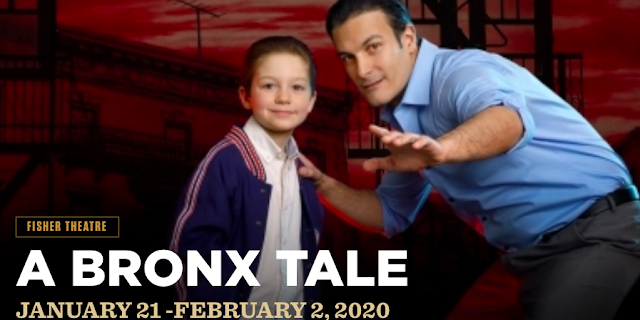 A BRONX TALE premiered at the Tony Award–winning Paper Mill Playhouse to critical and popular acclaim in Spring 2016. A BRONX TALE opened on Broadway at the Longacre Theatre on December 1, 2016, following previews from November 3. The show ended its Broadway run on August 5, 2018, having played 700 performances and as the second longest running show in the history of the Longacre Theatre.

Based on the one-man show that inspired the now classic film, this streetwise musical takes audiences to the stoops of the Bronx in the 1960s—where a young man is caught between the father he loves and the mob boss he’d love to be. Featuring an original doo-wop score, this is a tale about respect, loyalty, love, and above all else: family.

A BRONX TALE evolved from the one-man Off-Broadway play, A Bronx Tale, written and performed by Chazz Palminteri in 1989. During the original Off Broadway and subsequent Los Angeles engagements, Robert De Niro came to see the show, and brought the story and star Palminteri to the screen in 1993, making his film directorial debut in the process. Following the success of the film, Palminteri performed the one-man show A Bronx Tale on Broadway in the 2007-2008 Season.

Tickets for A BRONX TALE start at $39 (includes facility and parking fees) and are now on sale. Tickets can be purchased online at www.broadwayindetroit.com or www.ticketmaster.com, and by phone at 800-982-2787. A limited number of premium seats will be available through Ticketmaster and at the Fisher Theatre box office. For group sales (10 or more) please call 313-871-1132 or email groups@broadwayindetroit.com. Tickets for the open captioned and audio described performance may be purchased in person at the Fisher Theatre box office or by phone at 313-872-1000, ext. 0. Performance schedule, prices and cast are subject to change without notice.