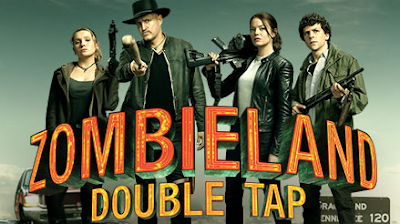 Read Nikki's review of Zombieland: Double Tap. A decade after Zombieland became a hit film and a cult classic, the lead cast (Woody Harrelson, Jesse Eisenberg, Abigail Breslin, and Emma Stone) have reunited with director Ruben Fleischer (Venom) and the original writers Rhett Reese & Paul Wernick (Deadpool) for Zombieland: Double Tap. In the sequel, written by Rhett Reese & Paul Wernick and Dave Callaham, through comic mayhem that stretches from the White House and through the heartland, these four slayers must face off against the many new kinds of zombies that have evolved since the first movie, as well as some new human survivors. But most of all, they have to face the growing pains of their own snarky, makeshift family. 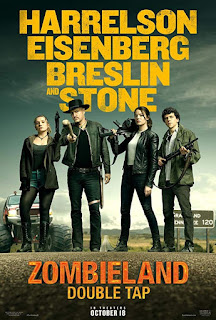 Zombieland: Double Tap is in theaters on October 18th, 2019.

The long awaited (ten years) sequel to Zombieland hits theatres this weekend and was definitely worth the wait! I didn’t want to watch trailers to this movie just because I wanted to go in with a fresh slate. For the most part, movie trailers seem to put in all the funny jokes in the trailer. I came out of the theatre very satisfied. This movie was as fun and funny as the first one, I may have even enjoyed this one a bit more!

It’s been ten years since the zombie outbreak but have no fear, Columbus (Jesse Eisenburg), Tallahassee ( Woody Harrelson), Wichita (Emma Stone) and Little Rock (Abigail Breslin) are still alive and together, but not for long. Little Rock leaves the pack because of course she wants to be a teenager and hang out with some. She leaves with a hippie wannabe, Berkley (Avan Jogia) to a gun-less community called ‘Babylon.’ It’s up to the rest of the gang to track her down and get her back. Along the way, they meet an airhead valley girl, Madison (Zoey Dutch) and Nevada (Rosario Dawson) a butt-kicking Elvis-obsessed woman.

I will start off by saying everyone in the movie had great chemistry together and were all great, especially the original cast, but I do want to point out how I absolutely LOVED Zoey Dutch. She definitely steals every scene she’s in, and when she wasn’t, I couldn’t wait for her to come back on. Rather than her playing just a typical airhead, she uses her talented comedic charm and characterization to make Madison her own.

The opening scene definitely had me pumped up and excited for the whole movie. I will say some of the kills are gory and gross, but it is expected since the first one was a bit gory as well. This movie had better action than the first. My favorite part of the movie has to be when Tallahassee and Columbus meet their dopplegangers. That whole scene was fun and hilarious. There may be some people that think this movie was very similar to the first one and the jokes are the same. I think it was hilarious the whole way through and although the story isn’t as strong as the first, the fun moments took away from the flaws. This movie reminds us that sometimes we need to just kick back and enjoy the little things!

Double Tap is a fun, worthy sequel to Zombieland that keeps the spirit of the original alive. If you enjoyed the first one, I think you’ll definitely have fun with this one!

P.S. Stay till the very end!