Read Ashley's review of Hobbs & Shaw. Ever since hulking lawman Hobbs (Johnson), a loyal agent of America's Diplomatic Security Service, and lawless outcast Shaw (Statham), a former British military elite operative, first faced off in 2015's Furious 7, the duo have swapped smack talk and body blows as they've tried to take each other down. 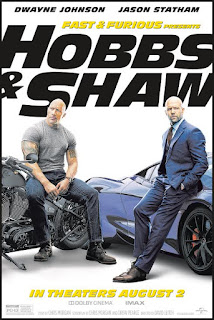 Hobbs & Shaw is the first spinoff from the Fast and Furious franchise. It stars Hobbs (Dwayne “The Rock” Johnson) and Shaw (Jason Statham) as a duo that must stop enemy Brixton (Idris Elba) from obtaining a substance that could wipe out most of humanity. The duo must also combat not killing each other. Can this spinoff from the Fast & Furious live up to the $5.1 billion+ franchise?

To no surprise this movie starts off with action. It continues to get more grandiose in the scenes until it almost becomes too much. We all know that the movie is fiction but the director and writers seem to have fun with that notion and deliver action scenes that are massively unrealistic. That does not take the excitement away from them and instead does the opposite by giving the audience the summer blockbuster we have been waiting for.

Hobbs & Shaw also delivers comedy in addition to action. The duo are constantly bickering and trying to out each other. This leads to several hilarious scenes of bantering between the two where some of the dialogue is missed because the audience is laughing so hard at the previous joke. Hobbs & Shaw also has a storyline that is worth following. With a big name cast, Hobbs & Shaw continues that feeling of Fast & Furious franchise while taking out a majority of the cast that fans have come to know. It still works with Johnson, Statham, Elba and even some cameos from other actors.

Hobbs & Shaw shows that Fast & Furious can still live in the spotlight while branching out into a new direction. Although it takes a detour from the originals, this movie still pulls all the stops necessary to create a movie worth remembering.