'After the Wedding' was too Predictable - Lauren's Review 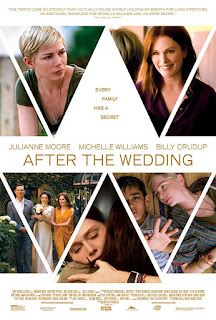 Read Lauren's review of After the Wedding. As if driven by an inescapable force, Isabel (Michelle Williams) has devoted her life to running an orphanage in a Calcutta slum. With funds running dry, a potential donor, who requires she travel from India to New York, to deliver a presentation in-person, contacts Isabel. At first balking at the demand of an uncommitted philanthropist, she relents, and travels to a city she deliberately hasn't returned to in over two decades.

After the Wedding is in select theaters on August 16th, 2019.

After the Wedding is a remake of a 2006 Danish drama by the same name. That film was a critical success that was even nominated for the Academy Award for Best Foreign Language Film that year. While I would bet my life that stars Julianne Moore and Michelle Williams will both generate Oscar buzz for this 2019 remake, I think the movie itself fell flat. I will say what I did like about this remake was that they switched the gender roles. In the original, Mads Mikkelsen took the lead role that Michelle Williams plays in this version. Girl power!

After the Wedding finds Michelle William’s character, Isabel, working for an orphanage in India. When the orphanage is contacted by a wealthy benefactor in New York offering a substantial donation but requesting that Isabel specifically travel to New York to discuss, she has no choice but to accept. When she meets the benefactor Theresa (Julianne Moore), she’s irritated to find out Theresa has not fully agreed to the donation at all and seems completely preoccupied by her daughter’s wedding happening that weekend. Theresa invites Isabel to the wedding to let them get to know each other more, and this unravels a series of events in which Isabel’s past collides with Theresa and her families’ present, and future.

While I liked the preface of the movie, this somehow felt very rushed. At a little under 2 hours, you would think there was more than enough time, but many of the emotional scenes seemed to come out of nowhere. The wedding where all the events unfold happens within the first half hour of the movie, and yet the aftermath seems to have too many drawn out unimportant scenes mixed in. Michelle Williams and Julianne Moore are amazing actresses and did a great job in their respective roles, with Billy Crudup joining the cast as Theresa’s husband and a man from Isabel’s past. But as soon as Isabel arrived at the wedding, it was almost too obvious what was about to happen. Overall, it was a decent movie, but it just felt a bit disjointed and rushed for me. Maybe I’ll have to check out the original 2006 version to see if that changes my opinion!