'The Farewell' is sweet and emotional - Ashley's Review 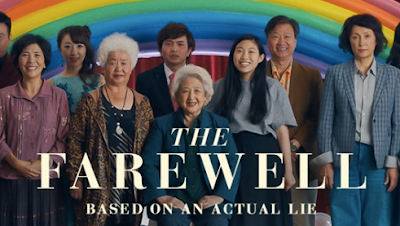 Read Ashley's Review of The Farewell. In this funny, uplifting tale based on an actual lie, Chinese-born, U.S.-raised Billi (Awkwafina) reluctantly returns to Changchun to find that, although the whole family knows their beloved matriarch, Nai-Nai (grandma), has been given mere weeks to live, everyone has decided not to tell Nai Nai herself. To assure her happiness, they gather under the joyful guise of an expedited wedding, uniting family members scattered among new homes abroad. As Billi navigates a minefield of family expectations and proprieties, she finds there’s a lot to celebrate: a chance to rediscover the country she left as a child, her grandmother’s wondrous spirit, and the ties that keep on binding even when so much goes unspoken. With The Farewell, writer/director Lulu Wang has created a heartfelt celebration of both the way we perform family and the way we live it, masterfully interweaving a gently humorous depiction of the good lie in action with a richly moving story of how family can unite and strengthen us, often in spite of ourselves. 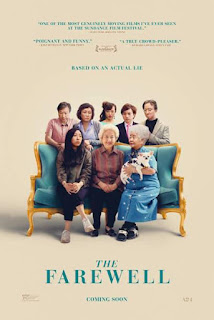 The Farewell is about a Chinese family that have all gone their separate ways in life. When they find out the grandmother Nai Nai has a short time to live, they decide to hide her declining health from her. They gather together in China under the ruse of a wedding to say give a covert farewell. Billi, her granddaughter, is against keeping her health a secret and feels out of place among her family and her home country. Can this comedy drama convey the emotions of a real family?

This film feels like it teeters in between documentary and real life. That could be because the director Lulu Wang based it on events that happened to her. It is a story that seems to be told from the heart and relatable. It brings light to Chinese culture and how generations of families deal with sticking to Eastern culture, Western culture or meet somewhere in the middle.

Awkwafina embodies the role of the granddaughter who was moved to America at a young age and is caught in between the cultures of America and China. Surprisingly the comedian was able to tone down her usual antics and deliver a character that was much more down to earth. The characters within the family also gave down to earth personas that viewers can relate to possibly with their own families members. This gave the film a real life edge which made the funny scenes even funnier and the emotional scenes bring members of the audience to audible cries.

The way the film is edited as well as the scenes are enough to keep you guessing what happens next. The close up angles and camera set as if you were a fly on the wall helps to make viewers feel involved to the point of making them think of what they would do in the family’s situation.

The sweet, emotional family story that the Farewell provides is one of the best of its kind so far this year. Between the believable cast delivering laughs and tears alike and the visuals this movie transforms an ethical dilemma into something enlightening.