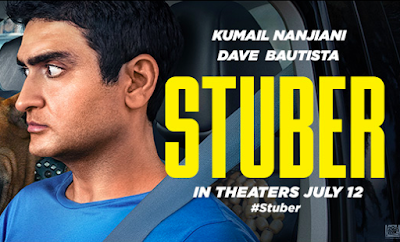 Read Nicolette's review of Stuber. When a mild-mannered Uber driver named Stu picks up a passenger who turns out to be a cop hot on the trail of a brutal killer, he’s thrust into a harrowing ordeal where he desperately tries to hold onto his wits, his life and his five-star rating. 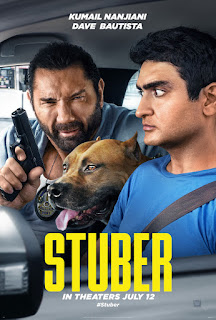 Stuber hits theatres this weekend and I must say before watching this movie I really didn’t know much about it. I didn’t watch the trailer and to be honest, I really wasn’t interested in it. I did hear it was a comedy. If you didn’t know, it’s very hard to make me ‘laugh out loud’ when it comes to movies. After watching it, however, I can confirm this movie is hilarious, a little over the top at times, but funny.

This movie is about a sports good employee named Stu (Kumail Nanjiani) who doubles as an Uber driver. An LAPD officer named Vic Manning (Dave Bautista), who is obsessed with trying to catch a ruthless narcotics drug dealer, and for a good reason. While recovering from laser eye surgery, he orders an uber (Stu) and expects Stu to drive him on this police chase in exchange for a 5-star uber rating. Yes, the premise does sound a bit silly, therefore you’re probably thinking it’s funny majority of the time with little action. Instead,the movie to me feels like a tough cop drama.

I will admit it is a bit slow in the beginning, but it does pick up and becomes quite enjoyable. The best thing about the movie are the genuine moments that were given during the most craziest moments. Stu is struggling to not be so much of a pushover to a girl he really cares about while Vic is struggling to be a good father. Both were ranting about each others problems in the middle of a shootout, yes a little over the top, but it worked. Nanjiani and Bautista worked great together. Nanjiani was hilarious and carried the comedic lead while Bautista was able to carry the action. The story is definitely something seen before. There were a couple of twists but it was very easy to see where it was going. I didn’t really like the first sequence due to the shaky camera technique, but it did settle down throughout the rest of the movie. I will also say that the movie is violent with some blood.

It may be a predictable movie but I really did have a blast watching. If you like action comedies and found the trailers appealing, then it will definitely entertain.