Read Nicolette's review of Spider-Man: Far From Home. Peter Parker returns in Spider-Man™: Far From Home, the next chapter of the Spider-Man™: Homecoming series! Our friendly neighborhood Super Hero decides to join his best friends Ned, MJ, and the rest of the gang on a European vacation. However, Peter's plan to leave super heroics behind for a few weeks are quickly scrapped when he begrudgingly agrees to help Nick Fury uncover the mystery of several elemental creature attacks, creating havoc across the continent! 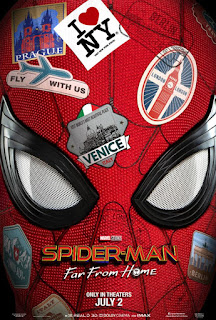 Spiderman: Far From Home hits theatres this Fourth of July weekend! I was super excited to watch this movie and it does not disappoint! After watching this movie I must say ‪it’s definitely my favorite Spider-Man (live-action) movie so far (way better than homecoming) It had stunning visual sequences and was also very funny! something needed after a sad ending to End Game!

The movie picks up right after End Game. Peter Parker (Tom Holland) is trying to live a more simple life going on a school trip to Europe and wanting MJ (Zendaya) to know his feelings about her. However, Nick Fury (Samuel L. Jackson) is trying to get into contact with Peter because of these new creatures called ‘The elementals’ causing destruction. He needs Spiderman to take them down along with the help of a new hero named Quentin Beck (Jake Gyllenhaal) aka Mysterio.

Tom Holland really is a great Peter Parker and the greatest (live action) one. He really captures the emotions of a teenage boy and the pressures that come with being one. You really sympathize with him, especially in the beginning when he talks about how he doesn’t feel worthy enough to be the next Tony Stark. Jake Gyllenhaal is also great as Quentin Beck. I really enjoyed the scenes with both Peter and Quentin and the friendship they develop. Jake definitely steals the show with his energy and charismatic charm. I’m also happy about Zendaya’s performance as MJ. Her romance with Peter is awkwardly cute and funny.

The action is fantastic, much better than Homecoming. Director Jon Watts really delivered some great sequences, especially the trippy while also breathtaking Mysterio sequences. There’s a certain sequence that features the coolest imaginative set pieces that exceed anything you saw in Doctor Strange. This movie was so much fun and entertaining while also giving the audience meaningful closure to previous events. I can’t wait to watch it again.

Don’t forget to stay after the credits for the post credit scene!