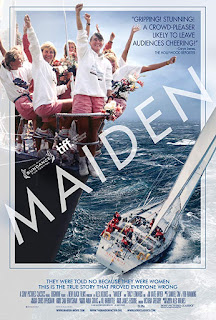 Read Jazzlynn's review of Maiden. The story of Tracy Edwards, a 24-year-old cook on charter boats, who became the skipper of the first ever all-female crew to enter the Whitbread Round the World Race in 1989.

Maiden is a documentary about the first all-female crew, led by Tracy Edwards, to sail in the Whitbread Round the World Race. I have watched a lot of documentaries over the years and this has to be one of my favorites now.

I have never cared about sailing competitions nor do I care now, but this documentary isn’t about just a “sailing competition”. It’s about the outrageous backlash these women received and how despite everything, they accomplished what they set out to do.

What I mainly loved about this was the empowering message being shown. Not everything is easy, but when you are entering into a very male dominated sport, it definitely gets a lot harder if you are a woman. These women stood their ground, held out, and proved to the world that they are just as capable to sail the seas.

I honestly would have given this a solid five rating, if the ending had a “what happened after" section. The closure was okay but I had really wanted to know more about the individuals that were featured and how people viewed the race after. It does open the opportunity to do this research and delve deeper into this story on your own. If you ever get a chance to see this documentary then I highly suggest that you do.