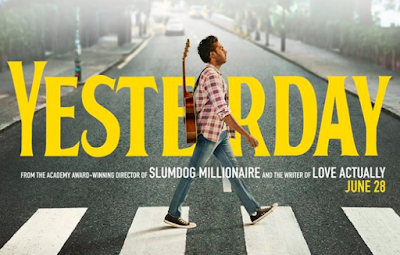 Read Lauren's review of Yesterday. Yesterday, everyone knew The Beatles. Today, only Jack remembers their songs. He's about to become a very big deal. From Academy Award®-winning director Danny Boyle (Slumdog Millionaire, Trainspotting, 28 Days Later) and Richard Curtis, the Oscar-nominated screenwriter of Four Weddings and a Funeral, Love Actually and Notting Hill, comes a rock-n-roll comedy about music, dreams, friendship, and the long and winding road that leads to the love of your life. 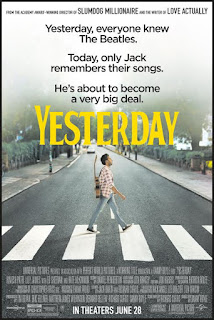 When I saw a movie was coming out highlighting the Beatles, I was immediately SO excited. I loved Across the Universe and I’ve been a Beatles fan since I was born. My mom LIVES for The Beatles – she cries on John Lennon and George Harrison’s birthdays, so it’s safe to say I grew up listening to them pretty frequently. When I saw the preface of the movie, I could tell it was going to be a fun, summer movie to enjoy.

Yesterday is about struggling musician Jack Malik, played by Himesh Patel. After getting into a strange accident while there’s a mysterious global blackout, he wakes up to discover that The Beatles never existed. What a world, right? He begins to play their songs and take credit for them. As his fame skyrockets because of these amazing songs, we watch what this does to the relationships around him. While this is outlined with The Beatles’ beautiful music, we see the subplot of his relationship with Ellie, Jack’s best friend and first manager, who both clearly had feelings for each other but hadn’t developed (yet).

Yesterday knows that our love for The Beatles is universal, true, and timeless. This movie was fun and silly without taking itself too seriously. I was surprised to see that the director was Danny Boyle, who’s known for such quality, typically serious films like Slumdog Millionaire, 127 Hours, and Steve Jobs. However, once I noticed Richard Curtis was the screenwriter, I understood. Curtis is known for classic rom coms like Love Actually and Four Weddings and a Funeral. Yesterday fits with the Love Actually feel with its British origins and focus on music and love. So, if you love the Beatles and want to see some great scenes with Ed Sheehan playing himself, then head to the theaters to see Yesterday! And prepare to leave singing all your favorite Beatles songs after.