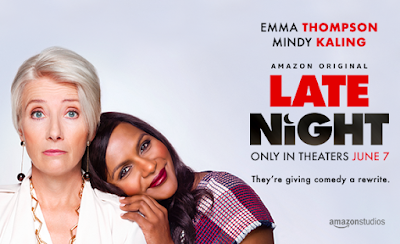 Read Billy's review of Late Night. Legendary talk-show host Katherine Newberry (Oscar® winner Emma Thompson) is a pioneer in her field. The only woman ever to have a long-running program on late night, she keeps her writers’ room on a short leash ― and all male. But when her ratings plummet and she is accused of being a “woman who hates women,” Katherine puts gender equality on her to-do list and impulsively hires Molly Patel (Mindy Kaling), a chemical plant efficiency expert from suburban Pennsylvania, as the first and only female on her writing staff. With rumors swirling that Katherine is being replaced by a younger, hipper male host, she demands that the writers make her funny and relevant again. A lifelong fan, Molly is determined to prove she’s not just a diversity hire, but the one person who can turn her idol’s career around. Going against everything Katherine has staked her reputation on, she urges her to make the show more contemporary, authentic and personal, a move that could make Molly’s career ― or send her back to the chemical plant for good. 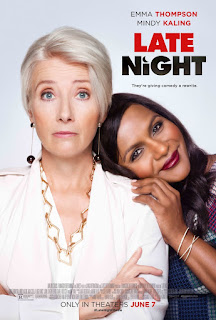 So if Emma Thompson ever needed a side job, I think she could really be a late night host. Late Night is all about her character and being the first woman late night host.

The idea of this movie is interesting. There currently is no late night, network tv, female talk show host. It is dominated by the Jimmys, and others. So the idea of seeing how a woman would take on the role is interesting. However, the film doesn't really bring to a point to why there have been no others outside Emma Thompson.

If Thompson's character, Katherine, was the first female late night host, and she has now been doing it for over twenty years, why wouldn't the other networks pick up on the idea and get a female host of their own. We know other studios/companies, tend to copy the ideas and release similar things, I'm just surprised that they didn't do that too.

The comedy this movie brings is very dry. While I do like dry comedy myself, I think there is a natural point we want in a movie, and Late Night goes over that point. This movie might do better in the UK market, where they live and breathe dry comedy, I just think for a US release, it will land flat, or dry.

The chemistry between Emma Thompson and Mindy Kaling does seem real. They seem to fit well together and it makes you want to lean in more to understand the tone they both are bringing together on screen. These two show an awesome friendship on screen that will make you want to believe they are friends still after the making of this movie.

I think if I were you, I'd stick with waiting to see this one on Amazon Prime. I think it may be more enjoyable in the comfort of your own home. This way you can watch some of it, and take a break when you are done with the dry comedy.