'5B' is pretty conventional - Joanna's Review 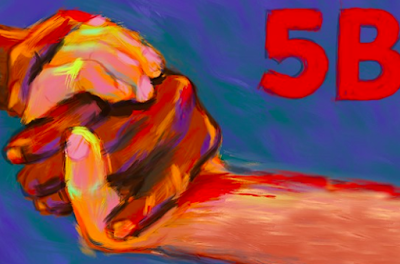 Read Joanna's review of 5B. In the mid-1980s, a simple number and letter designated a ward on the fifth floor of San Francisco General Hospital, the first in the country designed specifically to deal with AIDS patients. The unit’s nurses’ emphasis on humanity and consideration of holistic well-being was a small miracle in the midst of a devastating crisis and the ensuing panic about risk and infection. The story of 5B is stirringly told through first-person testimony of the nurses who built it, their patients, loved ones, and the hospital staff who volunteered, resulting in a bittersweet and moving monument to a pivotal moment in American epidemiology, San Francisco history and a celebration of quiet heroes worthy of remembrance and renewed recognition. 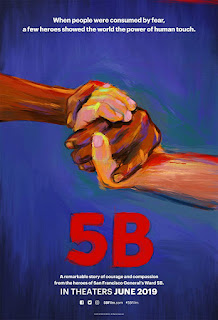 5B is a documentary about the staff and patients of San Francisco General Hospital’s AIDS ward during the early years of the epidemic. Founded as the world’s first inpatient AIDS ward that originally could only provide hospice care, they made waves for the compassionate care they provided to their patients such as refusing to wear masks and not being afraid to touch the young, gay men who filled their hospital beds. Former nurses and volunteers are among those who give interviews in this film, providing a first-hand account of their struggles and eventual triumphs.

While the staff certainly deserve to be commended for their work (despite what Dr. Lorraine Day would have viewers believe, whose inclusion in the film I found odd), I found the movie itself to be pretty conventional and boring. It was cool to see the occasional flashback footage amid modern-day interviews and you can tell they are rightly heartbroken over what they had to live through. However, with a heavy subject and many hats in the ring, it lacked a sort of driving force to really carry it along, and only really became slightly inspiring in the last 10 or 15 minutes.

While the subjects of 5B convinced me of the significance of San Francisco General Hospital’s work, I think last year’s Sundance standout, Quiet Heroes provides a more compelling account of the early years of the AIDS crisis. Or, for a dramatic interpretation, HBO’s The Normal Heart starring Mark Ruffalo was also a great watch. That being said, if you can’t get enough AIDS history or you were around San Francisco in the ‘80s, this may be the film for you.

Joanna (Guest Contributor) was born and raised in Metro Detroit. A fan of thought-provoking thrillers and indie films, she also enjoys a good chick flick. When not at the movies, she can be found running, reading, or writing bar trivia.
Click Here to check out Joanna's Articles.
Posted: June 15, 2019
Labels: JoannaConnelly19, Reviews19
Newer Post Older Post
Subscribe to: Post Comments (Atom)
Subscribe to Mind on Movies for Movie Screenings and Giveaways.