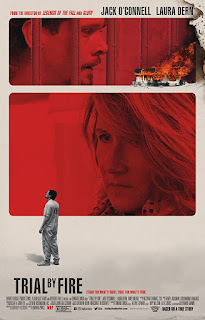 Read Joanna's review of Trial by Fire. Trial by Fire is the true-life Texas story of the unlikely bond between an imprisoned death row inmate (Jack O'Connell) and a mother of two from Houston (Laura Dern) who, though facing staggering odds, fights mightily for his freedom.

Trial by Fire is based on the true story of Cameron Todd Willingham, who was convicted in 1992 of killing his daughters by arson at their home in Texas while his wife was out at work. Insisting on his innocence, he refused to plead guilty in exchange for a life sentence and was instead given a death sentence. Seven years later, a writer and mom of two named Elizabeth Gilbert (played by Jurassic Park’s Laura Dern) meets Todd and begins to fight for his right for a fair trial.

I hadn’t heard about this case before, but this movie did a lot to spark my interest. I will definitely be reading the New Yorker article it is based on for more factual details—less marred by the need for on-screen drama. As intended, the film takes a hard look at the politics of the death penalty. As a bleeding heart, like Dern’s Gilbert, I found this to be a moving story worth sharing and recommend you bring tissues to the theater.

While the story had a relatively slow start--it was 45 minutes in before Dern hit the screen--the acting was very well done, with notable small roles for Jeff Perry (Scandal’s Cyrus Beene) and McKinley Belcher III (who I was surprised to spot again after just recently seeing him in Mapplethorpe). The use of flashbacks and fantasy sprinkled in did a good job to bolster the film’s heart as well as its ambiguity, keeping me on my toes as I learned more about Todd and found myself rooting for him despite his past.

Joanna (Guest Contributor) was born and raised in Metro Detroit. A fan of thought-provoking thrillers and indie films, she also enjoys a good chick flick. When not at the movies, she can be found running, reading, or writing bar trivia.
Click Here to check out Joanna's Articles.
Posted: May 17, 2019
Labels: JoannaConnelly19, Reviews19
Newer Post Older Post
Subscribe to: Post Comments (Atom)
Subscribe to Mind on Movies for Movie Screenings and Giveaways.