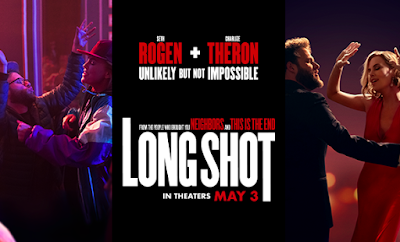 Read Ashley's review of Long Shot. He’s a hard-hitting political writer with a talent for trouble. She’s the country’s top diplomat with a talent for...well, everything. When Fred Flarsky (Seth Rogen) reunites with his first crush who also happens to be the current US Secretary of State, Charlotte Field (Charlize Theron), he charms her with his self-deprecating humor and his memories of her youthful idealism. As she prepares to make a surprise run for the Oval Office, Charlotte hires Fred to punch up her campaign speeches and their unmistakable chemistry leads to a round-the-world affair. But Fred’s carefree indiscretions, past and present, could bring down her campaign before it even begins. The film redefines “international relations” with a profane, funny and unexpected love. 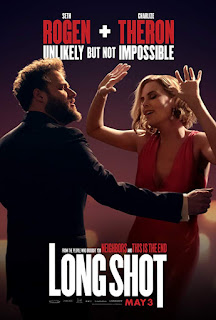 Long Shot is about Fred Flarsky (Seth Rogen) a stubborn, free-spirited journalist and a poised, sophisticated diplomat named Charlotte Field (Charlize Theron). The two are an unlikely duo but find themselves coincidental reconnection that leads to the age old question: do opposites really attract?

Seth Rogen and Charlize Theron are the movie couple I never expected to see but I was pleasantly surprised with. Seeing them act in roles they do not usually play was enjoyable and downright hilarious. The main cast overall was great from O’Shea Jackson Jr., Andy Serkis, Bob Odenkirk and more, they all had the audience laughing throughout the movie.

True to Rogen’s humor this movie uses vulgar language and comedy. Instead of completely reaching out of the box like other movies however it finds a middle ground by adding in a romantic component. As a result the director Johnathan Levine, who has previously worked with Rogen, may have created one of the best romantic comedies so far this year.

This movie does poke a lot of fun at modern politics in a way that is instantly recognizable. Having that in the movie especially since Theron’s character was a diplomat was funny and relatable to what goes on during the news viewers can see on television.

Seth Rogen movies can be very hit or miss and this one is a hit. It delivers the laughs and romance in a way that I was not expecting from Rogen and Theron and would be happy to see more of this type of rom-coms from him.