'How To Train Your Dragon: The Hidden World' is charming - Ashley B's Review 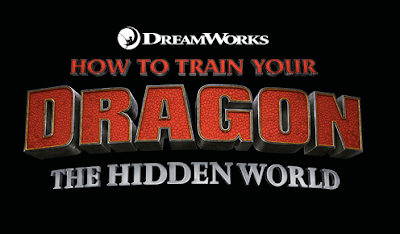 Read Ashley B's review of How To Train Your Dragon: The Hidden World. From DreamWorks Animation comes a surprising tale about growing up, finding the courage to face the unknown … and how nothing can ever train you to let go. What began as an unlikely friendship between an adolescent Viking and a fearsome Night Fury dragon has become an epic adventure spanning their lives. Welcome to the most astonishing chapter of one of the most beloved animated franchises in film history: How to Train Your Dragon: The Hidden World.
Now chief and ruler of Berk alongside Astrid, Hiccup has created a gloriously chaotic dragon utopia. When the sudden appearance of a female Light Fury coincides with the darkest threat their village has ever faced, Hiccup and Toothless must leave the only home they’ve known and journey to a hidden world thought only to exist in myth. As their true destines are revealed, dragon and rider will fight together—to the very ends of the Earth—to protect everything they’ve grown to treasure. 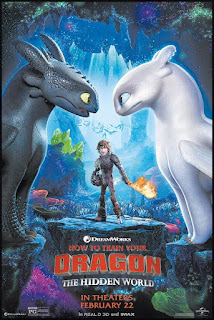 How To Train Your Dragon: The Hidden World is in theaters on February 22nd, 2019.

How To Train Your Dragon: The Hidden World is the third movie of the series that follows Hiccup, the new chief of Berk. After the appearance of Light Fury, Hiccup struggles to find the best method of leading his village while also protecting them from the dragon hunters who want to destroy them. Can the final movie bring the series to being a rare three for three successful trilogy?

This movie had the difficult task of filling in any left over questions while still keeping up the visually entertaining story of the previous two. It achieved that and more while watching and I was completely invested in this movie as I was the first. The visuals were just as, if not more, mesmerizing as before.

The plot was also as captivating because it delivered answers to left over questions and subplots. If anything it opened up even more yet still had the time to close them. Where this movie lacked in comparison to the first two was its action was more spaced out. Instead of relying on a more action packed story, this movie was more emotionally based. This made for a tough balance between humor and emotions and more times than often the humor won making the more emotional scenes seem diluted.

The fact that it is still a charming tale of majestic creatures living in harmony with humans is enough to have a movie that is worth watching again and again. It is rare for a trilogy, especially a cartoon to have all three movies be good and How To Train Your Dragon accepted the challenge and excelled.