Broadway In Detroit is thrilled to announce that THE LIGHTNING THIEF: THE PERCY JACKSON MUSICAL, an “electrifying” (Newsday) musical adaption of the New York Times best-selling novel written by Rick Riordan, will play Detroit’s Fisher Theatre. Tickets start at $49 and are now on sale. Tickets can be purchased online at www.broadwayindetroit.com or www.ticketmaster.com, and by phone at 800-982-2787. 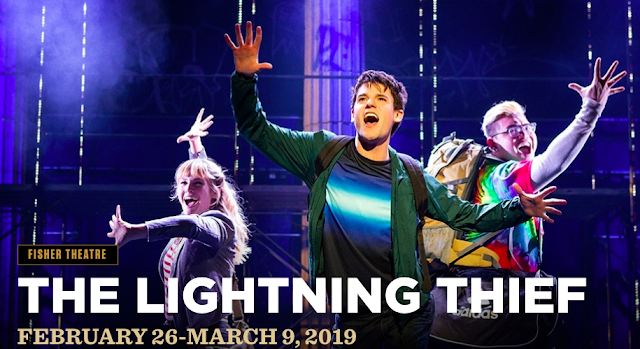 The Lightning Thief: The Percy Jackson Musical begins with a loud thunder clap, then five performers move to the front of the stage, singing to punchy rock music. It’s a perfect beginning to this clever, hip and irreverent musical, which merges teenage angst with Greek mythology. Adapted from the first book of Rick Riordan’s popular series of novels, The Lightning Thief tells the story of Percy Jackson who discovers not only that his absent father is the Greek god Poseidon, but that he has super powers himself. Bookwriter Joe Tracz is a huge Percy Jackson fan, and he and his collaborator, songwriter Rob Rokicki, worked tirelessly to find the right tone for the musical. “They’re big action adventure stories,” he explains, “but they have such a sense of humor and heart to them.”

Creating this wild, epic ride, without the sort of special effects available to film makers required director Stephen Brackett to come up with ingenious staging solutions to tell a story which features not only gods, but mythological monsters. The set has a rock concert vibe, with scaffolding and the stage magic is frequently visible to the audience. “We embrace that you’re actually seeing what it takes to make an effect in front of an audience,” explains Brackett.

When the show played a commercial run off-Broadway in 2017, it attracted not just super fans of the book but musical theater lovers of every age. “We were getting the millennials and families who read the books,” says producer Barbara Pasternack, “and we were getting adults who read fantasy and the comic con crowd, but we were also seeing audiences who had yet to discover Percy Jackson. These people were coming to experience an exciting rock musical and we definitely delivered.”

During the off-Broadway run, videos of some of the songs went viral on YouTube. And when the cast recording was released, “It bumped Hamilton and it went onto the Billboard charts and it bumped Bruno Mars and Beyoncé,” Pasternack relates. For the creative team, the themes in The Lightning Thief have broad appeal: “How do you take action in your life?,” says director Stephen Brackett. “How do you advocate for the world that you want to live in?” And, Brackett adds, “I think that’s a story that needs to be told.”

More information about THE LIGHTNING THIEF: THE PERCY JACKSON MUSICAL is available at http://www.lightningthiefmusical.com/

Tickets for THE LIGHTNING THIEF: THE PERCY JACKSON MUSICAL start at $49 (includes facility and parking fees) and are now on sale. Tickets can be purchased online at www.broadwayindetroit.com or www.ticketmaster.com, and by phone at 800-982-2787. A limited number of premium seats will be available through Ticketmaster and at the Fisher Theatre box office. For group sales (12 or more) please call 313-871-1132 or email groups@broadwayindetroit.com. Tickets for the open captioned performance may be purchased in person at The Fisher Theatre box office or by phone at 313-872-1000, ext. 0. Performance schedule, prices and cast are subject to change without notice.