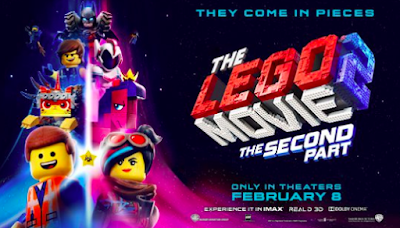 Read Ashley K's review of The Lego Movie 2: The Second Part. The much-anticipated sequel to the critically acclaimed, global box office phenomenon that started it all, “The LEGO® Movie 2: The Second Part” reunites the heroes of Bricksburg in an all new action-packed adventure to save their beloved city. It’s been five years since everything was awesome and the citizens are now facing a huge new threat: LEGO DUPLO® invaders from outer space, wrecking everything faster than it can be rebuilt. Reprising their starring roles from the first film are Chris Pratt as Emmet, Elizabeth Banks as Lucy (aka Wyldstyle), Will Arnett as LEGO Batman, Alison Brie as Unikitty, Nick Offerman as MetalBeard, and Charlie Day as Benny. They are joined by Tiffany Haddish and Stephanie Beatriz as new characters Queen Watevra Wa’Nabi and Sweet Mayhem, and by Maya Rudolph as Mom. 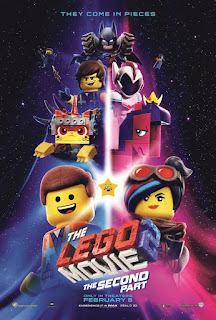 Chris Pratt (Emmet), Elizabeth Banks (Wyldstyle) and Will Arnett (Batman) return for the sequel but the question is...was it AWESOME?

Our favorite builder Emmet is back and when his friends are captured by Queen Watevra Wa-Nabi (Tiffany Haddish) he goes on a mission to rescue them. There’s cats, magical cats, dinos, glitter, superhero’s and everything in between.

Packed with fun some would say annoying but not me) songs, franchise crossovers, and a whole lotta awesomeness! Your kids will love the silly jokes, there’s some adult humor too but it’s appropriate. I also love the message at the end and the way they tie it all into the real world. It was fun to pick the scenes apart and try to guess what was going to happen next.

I felt like they relied very heavily on Batman, but this can be said for many franchises that feature the caped crusader. I love Batman I just wanted less of him in this movie.

Definitely a film for everyone to enjoy!