'Happy Death Day 2U' Who knew we needed a sequel?! - Nikki's Review Read Nikki's review of Happy Death Day 2U. Jessica Rothe leads the returning cast of Happy Death Day 2U, the follow-up to Blumhouse's (Split, Get Out, The Purge series) surprise 2017 smash hit of riveting, repeating twists and comic turns. This time, our hero Tree (Rothe) discovers that dying over and over was surprisingly easier than the dangers that lie ahead.
Jason Blum once again produces and Christopher Landon returns to write and direct this next chapter, while Happy Death Day executive producers Angela Mancuso and John Baldecchi are newly joined by EP Samson Mucke (Scouts Guide to the Zombie Apocalypse). 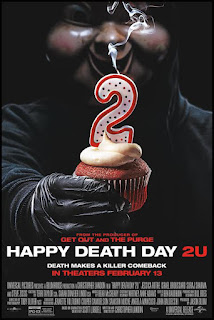 Valentine’s is here and so is the sequel to Happy Death Day. I wasn’t expecting much going into the movie. However I came out liking it. It was a very original movie that was less scary and way more fun. It’s just as enjoyable and clever as the first one--to me a little more enjoyable. If you liked the first film, you will for sure enjoy this one.

The film starts right where we left off. However, this time we start off in a car with Carters roommate Ryan, who is a science student. We follow him during the day of Tree’s birthday, where him and his lab friends including Carter (Israel Broussard, Samar (Suraj Sharma) and Dre (Sarah Yarkin) are working on a giant contraption. This machine restarted the same time loop that Tree got stuck into in the first film. Therefore Tree isn’t just replaying her own fate, but also the fate of the people in her lives. I would definitely recommend watching the first movie before watching this one, there are a lot inside jokes that you will only understand if you watched the first one and it can get a bit confusing.

We should go into the movie knowing that this is a fun movie. The writers clearly understood what was loved about the first one on a conceptual level. This was amazing for a second film, for a film that is literally about repeating things you see in a film. This was never meant to be a scary movie. Yes there are some flaws in the movie but to me, it’s all for enjoyment. There was even a scene that made me tear up a bit, which I would never imagined I’d be doing in a film like this. I loved Jessica Roth’s performance even more in this film, she is so magnetic and is totally a modern day scream queen. She needs to be in more films!

I would for sure go out this Valentine’s Day weekend and watch it! Also-stay after the credits! It definitely keeps it open for a third movie!