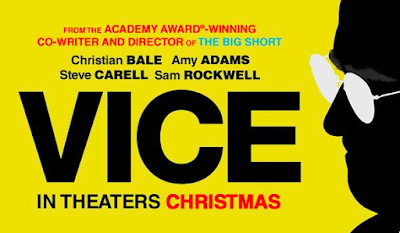 Read Gerard's review of Vice. The story of Dick Cheney, the most powerful Vice President in history, and how his policies changed the world as we know it. 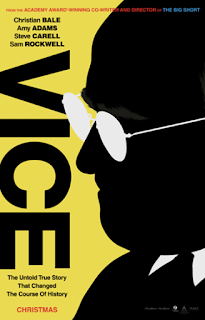 Everyday we are constantly bombarded with conflicting points of views and different takes on events from news outlets. Vice plays strongly on this idea by presenting us with a different interpretation of events that we all think we know. As they admit in the beginning of the film, they did what they can to fill the in gaps of former Vice President Dick Cheney’s life. While there is no saying what is true and what is false, the film takes you on a wild ride with all the stylistic excitement you can expect from Adam McKay. If you were a fan of The Big Short then you’re in for a great surprise with Vice which takes a similar style to the next degree.

Starting with Dick Cheney’s early life of DUI’s and mistakes, you meet the driving force behind his major life change: his wife, Lynne Cheney (Amy Adams). Adams is an incredible part of the film and takes a huge role in Cheney’s decisions and inevitable climb up the political ladder. Beginning as an opinion-less young man in the world of politics, Cheney hitches himself to the magnetic, yet aggressive, personality of Donald Rumsfeld (Steve Carell) and things begin to take off. From strategic professional decisions to personal health issues, all the way through the events of 9/11, Vice paints a vivid picture of a ruthless conservative with little consideration for anything other than his career and family. To say Christian Bale shine’s as Dick Cheney is ironic because he is truly lost in the character. It’s nearly impossible to tell where one begins and the other ends. As usual Bale has fully committed to his portrayal and it pays off big time.

Filled with other amazing performances by actors like Sam Rockwell and Tyler Perry, it’s hard to not get caught up in the detailed and disturbing story McKay and Bale have created. Personally, the film left me really considering if what I know of these events (among dozens of others) can be trusted. In a political landscape of agendas and varying opinions regarding what is fact and what is fiction, Vice drives home the reeling idea that it is nearly impossible to know for sure. And maybe more importantly, how that should concern us. Aside from the serious implications of the film, you will still find yourself constantly laughing thanks to the stylistic choices of McKay and the films unique and quirky storytelling.

Gerard (Contributor) is a New York Native who has worked as a freelance contractor for television shows on Netflix, MTV, TLC and several other networks. You'll find him keeping up on the latest Game of Thrones theories, writing his own short films or re-watching The Office for the hundredth time. Fool me once, strike one, but fool me twice...strike three.
Click Here to check out Gerard's Articles.
Posted: December 20, 2018
Labels: GerardNocco18, Reviews18
Newer Post Older Post
Subscribe to: Post Comments (Atom)
New Reviews