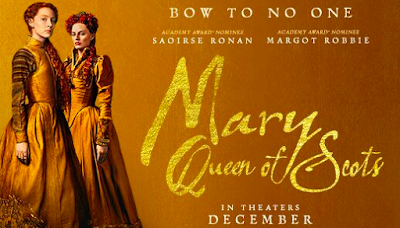 Read Ashley K's review of Mary Queen of Scots. Mary Queen of Scots explores the turbulent life of Mary Stuart (Saoirse Ronan). Queen of France at 16 and widowed at 18, Mary defies pressure to remarry. Instead, she returns to her native Scotland to reclaim her rightful throne alongside her cousin Elizabeth I (Margot Robbie), who rules as England’s Queen. Rivals in power and in love, and female monarchs in a masculine world, the two must decide how to play the game of marriage versus independence. Determined to rule as much more than a figurehead, Mary asserts her claim to the English throne, threatening Elizabeth’s sovereignty. Betrayal, rebellion, and conspiracies within each court imperil both thrones – and change the course of history. 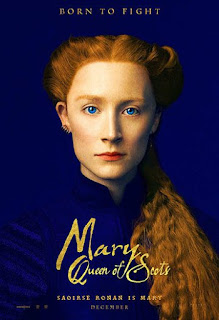 Mary Queen of Scots is in select theaters on December 7th, 2018.

Mary Queen of Scots is based on a true story with Saoirse Ronan playing Mary Stuart and Margo Robbie as Queen Elizabeth.

Mary Stuart was a catholic queen who was the ruler of Scotland and Queen Elizabeth was a Protestant who felt very threatened by her possible claim to the English throne, and her ability to bear children. Queen Elizabeth never married and had no heir for her throne. Mary ended up having a son who ruled over both England and Scotland.

The history of these events is very interesting and I do enjoy period pieces. This movie felt like walking through mud and didn’t explain enough of any of the situations. Both of these women lived extraordinary lives that were very complicated. With so much to tell it all felt crammed together and some scenes were brushed over or just didn’t make sense.

Overall I was expecting an elaborate period piece that was historically accurate. This felt like a mushed up teen drama.