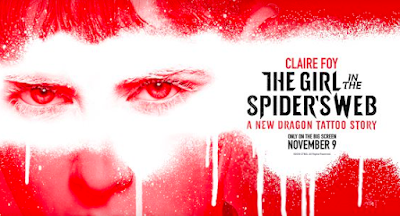 Read Billy's review of The Girl in The Spider's Web. Lisbeth Salander, the cult figure and title character of the acclaimed Millennium book series created by Stieg Larsson, will return to the screen in The Girl in the Spider's Web, a first-time adaptation of the recent global bestseller. Golden Globe winner Claire Foy, the star of "The Crown," will play the outcast vigilante defender under the direction of Fede Alvarez, the director of 2016's breakout thriller Don't Breathe; the screenplay adaptation is by Steven Knight and Fede Alvarez & Jay Basu. 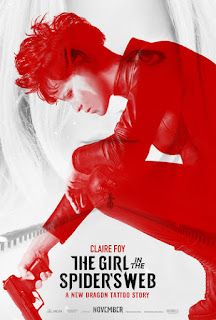 When you first watch the trailer for this, you might not realize that this is a sequel to the movie The Girl with The Dragon Tattoo. It has the same feel and look, it even has a character names Lisbeth Salander, but none of the same actors are returning. This isn't the first time a franchise has tried to replace the cast. James Bond comes to mind, a actor is James Bond for a certain amount of films before he is replaced with someone else. Even TV series are able to pull this off, Dr. Who comes to mind. I think this movie, while it tried to be it's own film, still relied on the original one too much.

While Claire Foy took on the role of Lisbeth Salander, I think she was perfect in this role. She was edgy enough to keep me into the movie, and she did help keep the movie rolling, it just seemed like she had too many hats on at once. Even James Bond gets a bullet in him every once in a while. Now maybe Lisbeth is really a bridge engineer in her off time, it just seemed like sometimes things would go her way just a little too easy.

Besides the film lacking things that would make sense in a daily life, it lacked in action. While there are five or ten minute spurts of action, the rest of the film just seems to be a slow moving train that is about to stop to pick up passengers, but they are at the wrong stop, and the train shouldn't stop at all.

I think you should try to watch it, but if you don't have time, or you are going to watch other films, you won't be missing much. You could probably even tell people you already watched it, and they won't doubt you because I'm sure they themself have not watched it as well to compare your notes.