Kind of rather forget 'What They Had' - Anthony's Review 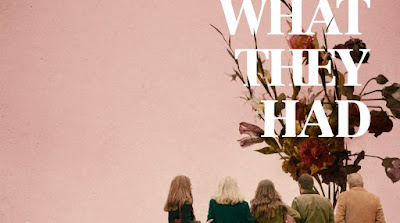 Read Anthony's review of What They Had. After her ailing mother wanders off during a blizzard, Bridget returns to her childhood home in Chicago, accompanied by her rebellious college-age daughter. Forced to referee between her father’s stubborn insistence that his wife remain at home and her equally determined brother’s efforts to place her in a sought-after “memory care” facility, Bridget struggles to make sense of a lifetime of family conflict. With her mother’s decline becoming increasingly obvious, long-simmering resentments make an already difficult decision close to impossible. Starring Hilary Swank, Michael Shannon, Blythe Danner, Robert Forster, Taissa Farmiga and Josh Lucas, What They Had is an intimate and tender story of a challenge faced by many families. 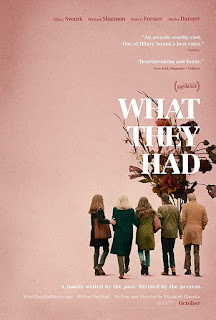 What They Had is in select theaters on November 2nd, 2018.

Bridget returns home at her brother's urging to deal with her ailing mother and her father's reluctance to let go of their life together.

I am really not to sure on where to start with this film There is probably just as much good as there is bad with it. Hilary Swank, who played the part of Bridget, had an okay performance but honestly wasn’t anything very compelling. I would have to say that Blythe Danner, who played Ruth, had a much better part than the lead did. She was able to capture dementia patients in a light that was both moving and respectful and she did an amazing job.

The pacing was pretty solid throughout the film but the best part was early on. They had a really cool sequence of shots that made you understand for about how long the mother had been missing for but other than that there wasn’t to much pizzaz with the whole thing.

The script had some good jokes that were pretty well timed and didn’t really detract from the serious tone at all except for when it really kind of mattered the most. The end of the film was supposed to leave us with a happy type of sad. Like everything would be okay. And it was definitely sad but it just kind of missed its mark honestly. It didn’t bring me back up when it was supposed to.

The changes in character, the lessons they learned, weren’t exactly spoon fed to us but everything was kind of just put in very much plain view. I would have personally liked to have seen the changes in the actual characters themselves not so much in what they had around them.

This movie really wasn’t bad.. It just really wasn’t good either. Probably the best thing this movie did was show the toll that families have to pay when treating and caring for family members with dementia.

Anthony (Contributor) was born and raised in the Tampa, Florida area. He likes Pina Coladas and long walks on the beach. He spends most of his time watching movies and spending times with friends.
Click Here to check out Anthony's Articles.
Posted: November 02, 2018
Labels: AnthonyBrost18, Reviews18
Newer Post Older Post
Subscribe to: Post Comments (Atom)
Subscribe to Mind on Movies for Movie Screenings and Giveaways.