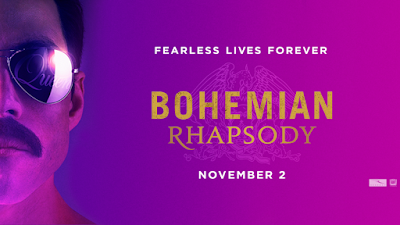 Read Ashley B's review of Bohemian Rhapsody. Bohemian Rhapsody is a foot-stomping celebration of Queen, their music and their extraordinary lead singer Freddie Mercury, who defied stereotypes and shattered convention to become one of the most beloved entertainers on the planet. The film traces the meteoric rise of the band through their iconic songs and revolutionary sound, their near-implosion as Mercury’s lifestyle spirals out of control, and their triumphant reunion on the eve of Live Aid, where Mercury, facing a life-threatening illness, leads the band in one of the greatest performances in the history of rock music. In the process, cementing the legacy of a band that were always more like a family, and who continue to inspire outsiders, dreamers and music lovers to this day. 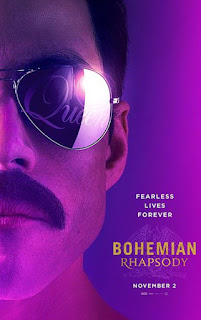 Bohemian Rhapsody is the much anticipated biopic of the band Queen with most of the focus on its lead singer Freddie Mercury. It explores their beginning days until the tragic death of Mercury. Will their biopic live up to their legacy or is there more to be desired?

This movie follows the usual chronological order of events that biopics follow. What stands out about this movie is how eerily similar the band looks to the person they’re playing. Since I was not alive when queen was in their prime, I relied on videos and each person especially Sami Malek who played Mercury did some serious research on their counterparts. They had everything down from the accidents to the mannerisms. This is a difficult thing to do even more so when playing such well-known individuals but they all knocked it out of the park.

The area I think this movie faltered is that it stayed on the surface level of everything. There weren’t that many moments where I felt like they were getting on a deeper level. This could be because Mercury was such a private person in real life especially due to his sexuality and how the media constantly questioned him. You could tell he was bothered but it never reached pass the surface. Also I feel like I did not learn much about the other members of the band because of the big focus on Mercury.

I still enjoyed watching because of the actors’ performances. They were the embodiment of who Queen was and I’m sure this biopic will go in the top greatest of its kind because it was like taking a step back to Queen’s heyday.