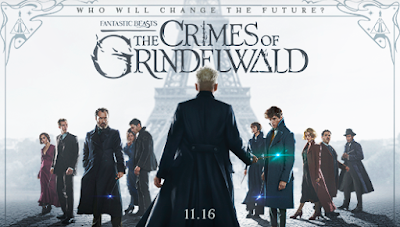 Read Steve's review of Fantastic Beasts: The Crimes of Grindelwald. Warner Bros. Pictures’ “Fantastic Beasts: The Crimes of Grindelwald” is the second of five all new adventures in the Wizarding World™ created by J.K. Rowling. At the end of the first film, the powerful Dark wizard Gellert Grindelwald (Johnny Depp) was captured by MACUSA (Magical Congress of the United States of America), with the help of Newt Scamander (Eddie Redmayne). But, making good on his threat, Grindelwald escaped custody and has set about gathering followers, most unsuspecting of his true agenda: to raise pure-blood wizards up to rule over all non-magical beings. In an effort to thwart Grindelwald’s plans, Albus Dumbledore (Jude Law) enlists his former student Newt Scamander, who agrees to help, unaware of the dangers that lie ahead. Lines are drawn as love and loyalty are tested, even among the truest friends and family, in an increasingly divided wizarding world. 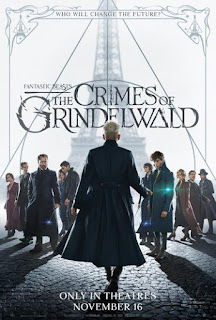 I literally could NOT WAIT to get to see the second movie in the Fantastic Beasts series, Fantastic Beasts: The Crimes of Grindelwald. I will try to keep my review unbiased from the fact that I have been obsessed with Harry Potter and the wizarding world J.K. Rowling created since I was a kid.

But enough about me, let’s talk shop...

Fantastic Beasts: The Crimes of Grindelwald picks up some time after we left our characters in the first movie of the series. We find all of the characters scattered across the globe, dealing with the consequences from the events in the first film. I want to avoid giving away unnecessary spoilers and #ProtectTheSecrets so I’ll just list the official logline below:

“As he promised he would, Grindelwald has made a dramatic escape and has been gathering more followers to his cause — elevating wizards above all non-magical beings. The only one who might be able to stop him is the wizard he once called his dearest friend, Albus Dumbledore. But Dumbledore will need help from the wizard who had thwarted Grindelwald once before, his former student Newt Scamander. The adventure reunites Newt with Tina (Katherine Waterston), Queenie (Alison Sudol) and Jacob (Dan Fogler), but his mission will also test their loyalties as they face new perils in an increasingly dangerous and divided wizarding world.”

Going strictly off of the movie itself, the film was incredible. It allowed us to see different sides of all of the characters from the first film, placing them in much more trying circumstances that push them all in wildly new directions. While I could praise every single performance given, I was especially blown away by Dan Fogler as Jacob and the emotional range his character experienced in this film, I truly felt for his character.

I have seen some reviews criticize the film for feeling rushed, and I can understand that. There was a lot going on in the movie for A LOT of different characters and at times it felt jarring, but I felt that allowed all of the interesting characters present in this series to have some time to shine. Your feelings on this will come down to personal preference, super fan or not.

As a huge Harry Potter fan, this installment raised some pretty big questions. Not just questions about the storylines in this series, but questions that reverberate through out the entire cannon of J.K. Rowling’s magical world. While I’ll admit I am definitely confused and wildly curious, I am mostly just excited. Rowling is doing an amazing job of not only expanding on her wizarding world, but also expanding on stories that served as legend in the Harry Potter series.