'The Samuel Project' may leave you teary-eyed. - Kelsi's Review

Read Kelsi's review of The Samuel Project. Damuel Bergman (Hal Linden), was orphaned at eight years old when he lost his entire family at the hands of Nazi captors. His saving grace was a young German woman named Uma, who found him and took him in after he was shot for trespassing on her family’s farm near Hanover, Germany. The story unfolds when his grandson Eli (Ryan Ochoa), who dreams of becoming a professional artist, pleads for Samuel to share his story for a high school art project. Hesitant at first, Samuel finally gives in when Eli offers to work at the drycleaners for free in exchange for his grandfather’s story, and for the first time, the two get to know each other. 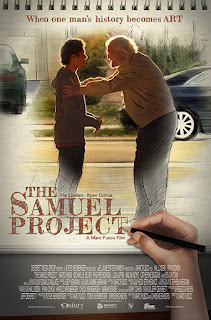 The Samuel Project is in select theaters on October 12th, 2018.

Although an outcast in school and deemed a “fool” at home for his love of art, Eli never stoped doing what he loves. In this heartwarming film of a grandfather and his grandson you explore new aged art, along with a good history lesson. The Samuel Project was definitely a touching film and may even leave you teary-eyed.

Eli (Ryan Ochoa) is a misunderstood teenaged boy who has a passion for art and creating masterpieces. While trying to come up with the perfect animated school project he is forced to spend some time with his grandfather. Who Eli thinks, is just a boring and grumpy old man. That is until a tragedy occurs that sparks up memories of the past, memories that his grandfather Samuel has kept hidden and suppressed for many years. Curious to know more about Samuel’s (Hal Linden) unspoken past, Eli does whatever he can to make his grandfather talk. Soon, Eli realizes he has the perfect school project right beneath his nose. With the help of his grandfather, his musical project partner and Eli’s very own talents, he indeed creates a masterpiece, The Samuel Project.

This film makes you want to explore your own history and unveil things of the past, while reminding you that it never hurts to ask questions. This is an enjoyable PG-13 rated film. There are however, some significant factors brought about in the film that go unanswered. Such as, the fact that Eli’s mother left when he was just a baby. I thought it was very odd this is mentioned in the film and then never fully explored afterwards. There is no explanation of why she left, where she went, or what exactly happened. They just mention it and then never bring it up again. But never the less this film was heartwarming and Ryan Ochoa played an exceptional role as Eli, who in the end achieved his ambitions.