'First Man' puts you in the rocket - Ashley B's Review 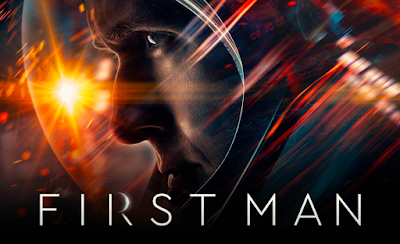 Read Ashely B's review of First Man. On the heels of their six-time Academy Award®-winning smash, La La Land, Oscar®-winning director Damien Chazelle and star Ryan Gosling reteam for Universal Pictures' First Man, the riveting story of NASA's mission to land a man on the moon, focusing on Neil Armstrong and the years 1961-1969. A visceral, first-person account, based on the book by James R. Hansen, the movie will explore the sacrifices and the cost—on Armstrong and on the nation—of one of the most dangerous missions in history. 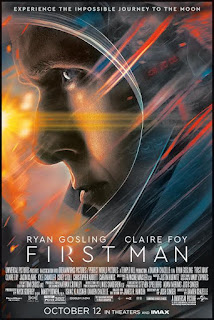 First Man tells the story of Neil Armstrong and his life between 1961-1969 focusing on his journey to landing on the moon. Based on the book by James R. Hansen, the movie gives a more in depth look of the hardships and motivation Armstrong had. With Damien Chazelle as the director, can he make another out of this world box office hit with Ryan Gosling as his lead or will this movie stay earth bound?

With historical movies like these I am always apprehensive of how well the content will be along with how well the characters will personify it. First Man did not disappoint because even though I knew the outcome, I was still along for the journey and learned new things along the way. The director and cast did an excellent job of showing Neil Armstrong’s life full of so many emotions justice.

At times it did feel like there was some overly dramatic areas that tried hard to go for an emotion that did not come naturally. This did not take away from the movie but it was hard to follow sometimes because it made Armstrong seem unapproachable and hard to read.

The amount of emotions this movie took me through was both shocking and enthralling. I was not expecting to see a softer and also tough skinned side to Neil Armstrong which was interesting to see because I did not know much about him other than textbook type information. Speaking of textbooks, some people in the audience did not seem to know the fate of some of the space missions prior to the Apollo 11. This movie includes the unsuccessful missions and the lives it costed so it may be a reminder of how difficult it was or a history lesson for others.

One thing I really enjoyed was how first hand point of view the camera angles got. There were times when I felt claustrophobic because of how small and constructed the air crafts were or the training the astronauts went through making both them and myself feel nauseous. I felt like I like I was experiencing some of the action scenes myself which was an interesting way to shoot as well as very immersive for me as a viewer.

I was pleasantly surprised with how much I enjoyed this movie. I typically like historical movies and I feel like Chazelle did a great job of encapsulated the feelings that both Armstrong, his family, friends and even America felt during that time period. I am excited to see more great movies to come from Damien Chazelle and Ryan Gosling working together.