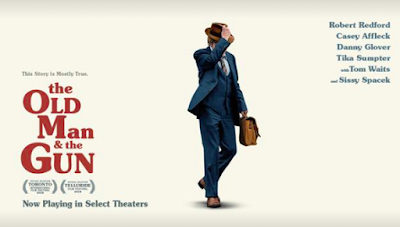 Read Ashely B's review of The Old Man and the Gun. The Old Man & the Gun is based on the true story of Forrest Tucker (Robert Redford), from his audacious escape from San Quentin at the age of 70 to an unprecedented string of heists that confounded authorities and enchanted the public. Wrapped up in the pursuit are detective John Hunt (Casey Affleck), who becomes captivated with Forrest’s commitment to his craft, and a woman (Sissy Spacek), who loves him in spite of his chosen profession. 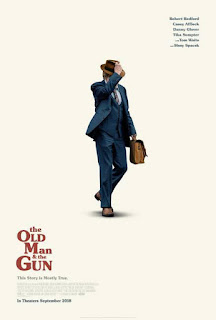 The Old Man & the Gun is based on a true story of a 70 year old man, Forrest Tucker, who escaped from San Quentin state prison and starts robbing banks across the country. Once a pattern of the heists is discovered by a detective, he becomes fascinated with the thought of catching Tucker. Can this movie set in the early 1980s do well on the big screen in 2018 or is Tucker’s story one not worth told?

At 82 years old Robert Redford plays Forrest Tucker who is a charming criminal that instantly grabbed my attention. This movie is being called his swan song as it may be his last movie due to his age. If it is, he is retiring from his craft with a bang because his performance was outstanding. Some of the best parts of the movie were him smiling and encapsulating both the story and character so well.

The storyline itself is also enough to drawn in attention because it’s like a glorified criminal. Even though Tucker went around pulling bank heists with a team of old men, he smiled and was such a gentleman which threw off his victims and also the audience at times. It was a different level of curiosity for what was to come because of this and draws you in for the ride, although a slow paced one at times.

If that’s not enough to then the cast steps in to complete the puzzle. Sissy Spacek as Tucker’s love interest Jewel was a great choice because their chemistry felt so realistic and was admirable. The detective and his wife’s chemistry was adorable as well as him being so enthralled with Tucker’s motivation to pull heists. There are several recognizable faces from other movies and they each play their roles so well and no one really overpowers the other which made things enjoyable.

The Old Man & the Gun has an old-fashioned yet timeless style to it while telling a story unlike anything I’ve ever seen before. While this very well might be Robert Redford’s last movie, his charismatic way of acting commanded enough attention and charm to make it well worth watching.