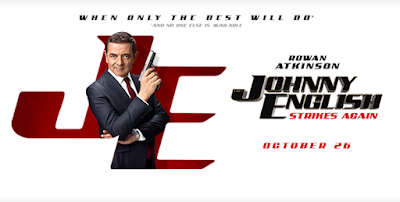 Read Ashley B's review of Johnny English Strikes Again. After a cyber-attack reveals the identity of all of the active undercover agents in Britain, Johnny English is forced to come out of retirement to find the mastermind hacker. 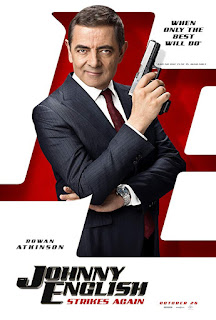 Johnny English Strikes Again is in theaters on October 26th, 2018.

Johnny English Strikes Again brings special agent Johnny English back into the field. After his blunders from the first movie, England get desperate for an agent after several cyber security attacks. Can Johnny English do well for part two or is it better left overseas?

Growing up I have always been a fan of Rowan Atkinson and was very excited to watch this movie. To my surprise this movie was not at all what I thought it would be. Not because of Rowan Atkinson who was hilarious as usual but because of the lacking supporting actors and the plot that was all over the place. There was definitely a pattern for the cast following that of your typical spy movie: an aloof sidekick, a sexy opposing spy, a tough as nails boss and even a funny tech guy. It had all the pieces to be a good cast but they did not mesh well and it felt very forced.

It did not help that the plot was all over throughout the movie. There was a lot of back and forth then ups and downs been diagonal in the story that made me lose interest fast. It would be more fitting for a child who likes stories that sounds around. This is not to say that there are not funny parts but it was not enough to keep interest in the story.

Whether or not you are a fan of Rowan Atkinson, I would say skip this movie and watch something else instead. Johnny English is a better fit for background noise at home where you don’t have to pay attention to the mindless by comedy.