Paul, Apostle of Christ is Now in Theaters

Mind on Movies wants to share with you about Paul, Apostle of Christ, Now in Theaters. 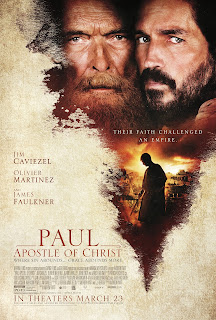 In PAUL, APOSTLE OF CHRIST , Luke risks his life to visit Paul, who is held captive in a Roman prison under Nero’s rule. Together, they struggle against a determined emperor and the frailties of the human spirit in order to live out the Gospel of Jesus Christ and spread their message to the world.
Paul’s letters and writings were vital to the spreading of Christianity, and became a large part of the New Testament. Our story focuses on how, despite persecution and peril, they shared Jesus’ message of love, redemption and forgiveness with a small community of believers who in turn, took it to the whole world.
Great pains were taken to maintain biblical accuracy. Using scripture as the only reference, director Andrew Hyatt recreated the story of Paul on film, including the close relationship with Luke, whom at the end of Paul’s life, at his own peril, traveled in and out of the prison carrying Paul’s writings to the community of believers