Read Mind on Movies review of Mudbound. Set in the rural American South during World War II, Dee Rees ' MUDBOUND is an epic story of two families pitted against one another by a ruthless social hierarchy, yet bound together by the shared farmland of the Mississippi Delta. MUDBOUND follows the McAllan family, newly transplanted from the quiet civility of Memphis and unprepared for the harsh demands of farming. 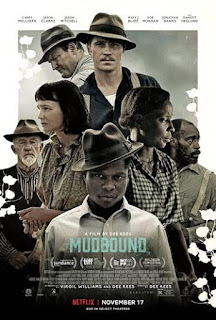