Mind on Movies is very excited to announce that we are working with Universal to giveaway The Snowman Exclusive Prize Pack, Starring Michael Fassbender. 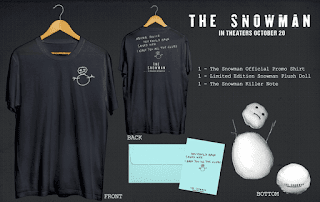 You Could Have Saved Her I Gave You All The Clues

The Snowman, a terrifying thriller based on the novel by Jo Nesbø is being released on Oct 19th. A sociopath who calls himself “The Snowman Killer” has targeted the one person for whom he wants to showoff his methodical, unthinkable skills: the lead investigator of an elite crime squad. With cunningly simplistic baits, he begs to have a worthy opponent to play his sick game.

Enter to win a The Snowman Prize Pack including:
1 - Limited Edition Snowman Plush Doll: This limited edition Snowman plush is only available via this promotion and has a run of 200 pieces worldwide. It is a replica of the killer’s Snowman and features a detachable head and the Snowman logo on the bottom.
1 - The Snowman Official Promo Shirt - An official promo T-Shirt featuring The Snowman logo on the front and the signature design on the back.
1 - Replica Snowman Killer Letter - A replica of the Snowman killer’s note, sealed.