War for The Planet of the Apes Bluray Giveaway!

Mind on Movies is very excited to announce that we are working with Twentieth Century Fox Home Entertainment to giveaway WAR FOR THE PLANET OF THE APES on Bluray! 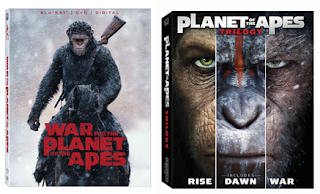 WAR FOR THE PLANET OF THE APES.
Certified Fresh on RottenTomatoes.com and “one of the very best films of the year” (Kristopher Tapley, Variety) arrives on Digital October 10 and on Blu-ray™, 4K Ultra HD™ and DVD October 24. Andy Serkis returns as Caesar in the thrilling and climatic chapter of the PLANET OF THE APES saga as Caesar and his apes are forced into a deadly conflict with an army of humans led by a ruthless Colonel (Woody Harrelson). After suffering unimaginable losses, Caesar resolves to avenge his kind, pitting him against the Colonel for a final showdown that will determine the future of the planet!

WAR FOR THE PLANET OF THE APES releases on Digital October 10th and on 4K Ultra HD™, 3D Blu-ray™, Blu-ray™ and DVD on October 24.