Enter to Win Godzilla from #CometTV

Mind on Movies is very excited to announce that we are working with CometTV to giveaway a Limited Edition Godzilla Action Figure. 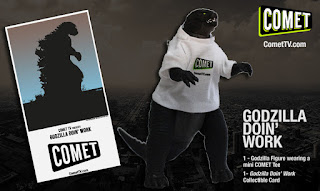 GODZILLA IS DOIN' WORK ON COMET TV IN SEPTEMBER

GODZILLA: FINAL WARS (2005)
Godzilla: Final Wars takes us to the 28th century where Earth has been ravaged by giant monsters, giving the Xiliens (a group of aliens who dress like they're in a 90's goth rock band) a chance to claim our planet as their own.

Godzilla 2000 (1999)
GODZILLA WEARS A TINFOIL HAT. Did you know Godzilla is a UFO believer? Unfortunately, years upon years of reading about alien abduction conspiracies on the internet can't prepare the King of Monsters for what happens in Godzilla 2000....When a UFO is awoken from a million-year slumber deep in the Earth's crust, it employs a series of sneaky tactics (gene-snatching, reckless driving, and more) to give Godzilla a real extraterrestrial beat-down.