Read Mind on Movies review of CROWN HEIGHTS. This is a real story, and it is what is needed right now. 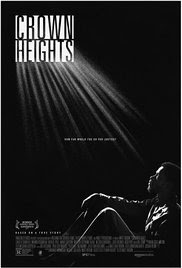