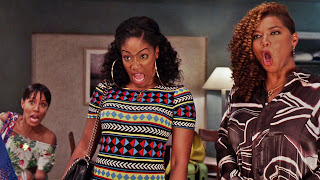 Four lifelong friends Sasha (Played by Queen Latifah), Dina (Played by Tiffany Haddish), Ryan (Played by Regina Hall) and Lisa (Played by Jada Pinkett Smith) unite to go on a “Girls Trip” to New Orleans. Everything seems to be going great as the girls party their hearts out, until they realize that one of their husbands is cheating. Now they are on a mission to save the marriage, while still partying.

I have to be honest, I thought this film was going to be awful. Surprisingly, it caught me off guard. I enjoyed “Girls Trip” for what it was. The jokes were ballsy and smart. They had me laughing throughout the film. This film was incredibly raunchy, my jaw was dropped from beginning to end. The acting in this movie also worked very well. All the actresses had their own moment to shine in their own unique ways. The characters were also developed very well and were very lovable. This film takes an emotional turn and ended up empowering women. For what this film was I really think that it succeeded.

Now this film did have its flaws. It didn't seem to offer anything new to the genre and it was stretched out a little longer than it should have been. If the runtime was cut down by about 20 minutes, it would have flowed much better. Also the dialogue was cheesy at moments. Another negative element I noticed was the cinematography was very bland and with all the partying it could have taken a more creative approach.

Now like I mentioned earlier I was taken off guard by this film. It ended up being very entertained and unbelievably raunchy. While it does have some flaws, the acting chops from the cast and the surprisingly smart humor definitely makes up for them. I recommend “Girls Trip” to anyone who wants to see a fun and raunchy comedy!

Pee, that's all I need to say.

You will bust your gut watching this movie. Go and see it. Tell me you didn't pee yourself, and I will call you a liar.