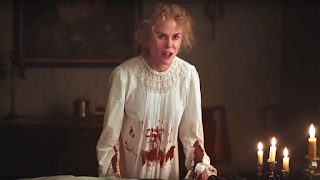 The Beguiled is set in an all girls school in Virginia during the Civil War. Since it is the summer, many of the students and teachers have gone home leaving seven of them behind. One day while picking mushrooms one of the students stumbles upon an injured yankee and takes him back to the school where he meets the inhabitants and suspicion, sexual tension and jealousy arises.

Having heard little about this film I was not sure what I was in for other than the time period and several big named actors. At the start of Beguiled, the music and camera angle is eerie as a young girl is searching through the woods for food to take back to the school. When she stumbles upon Corporal John McBurney (Colin Ferrell), it is easy to pinpoint as a possible traitor being a yankee across southern lines randomly lost and injured while hiding. From there his flirty and charming personality shows him as being "beguile" as he flirts with several of the girls in the schoolhouse. As a result, it is hard to see what his intentions are as the headmaster (Nicole Kidman) attempts to heal his leg so he can get back on his way

Warning the leg wound is gory and well portrayed so if you have a weak stomach there are scenes with it being broken as well as stitched up. I heard a few cries of disgust from viewers around me because the camera is not shy with getting up close and personal to the wound.

Back to the acting, the actresses did a great job at vying for the corporal's attention despite threats for him to be turned in to the confederacy so he can be thrown into jail to rot. There is even a delicately, innocent scene soon after he is discovered were the headmaster washes him and becomes hesitant while cleaning his hipbone area near the top of his underwear. It's easy to tell that the women are excited to have a handsome man in the schoolhouse but are still hesitant because of which side he is on in the war.

They eventually find out which side his loyalty lies in the war they are put at ease and the jealously and competition for his attention worsens. When they find out that his loyalty waivers between the women, that is when things really shake up in the movie. All the tension builds up to him turning on them and becoming a crazed man with a gun controlling the women.

This is where the movie plummets because all of the build and tension you watch falls short in the end because I thought the ending would be more of a bang but it more like a quiet and dull pop. With so many other routes it could have gone or even stayed in line with the novel it based on or the 1971 version with a more convincing flier being Clint Eastwood, I feel like this film turned into a let down because it took me as a viewer to a high peak and gently let me down by parachute instead of giving me the turns and turmoil I expected on the other side of the hill.