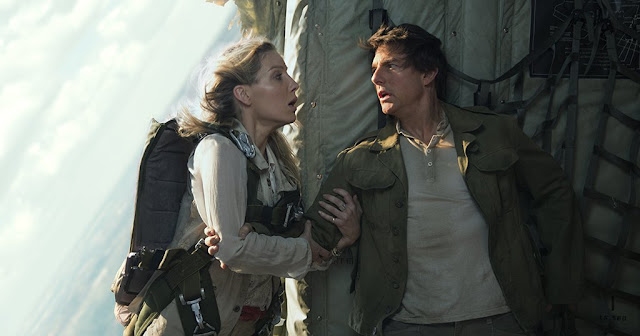 Release: June 9, 2017 | Runtime: 107 minutes | Rated: PG-13
I am obsessed with this movie. In all honesty I was expecting it to suck. When I heard they were rebooting the mummy my eyes rolled to the back of my head, when I heard Tom cruise was in it I'm pretty sure they got stuck. I went in thinking ok just gotta make it through - hang in there. I basically gave myself a mini pep talk. Anyways...I went in not expecting much and it ended up being awesome!

This is not a remake of the classic mummy film or the Brandon Frazier movies. This is a reboot to launch the Dark Universe (universals version of a team up movie with the classic movie monsters).

It tells the story of Ahmanet played by Sofia Boutella, who was an Egyptian princess and after some very bad decisions - was buried alive in a tomb. Nick, played by Tom Cruise and Sergeant Vail(Jake Johnson) happen to discover said tomb and after meeting Jenny (Nicks friend and doctor) they fly the tomb back to London. The plane crashes and the mummy gets out and lots of action and suspense follows. Nick meets Jenny's boss, played by Russel Crowe who is actually Dr.Jekyll. He basically searches for evil in the world and destroys it at his underground facility. Now I know what you're thinking - Dr.Jekyll, really? Come on! This is ridiculous! But it's not! It's awesome, it fit perfectly with the movie and it all just worked.

Sofia was amazing as the Mummy. I'm happy to see a female in the lead role and it made for a really interesting back story, I just wanted to know more about her.

What I want people to understand is this is NOT a classic horror film remake, and it's not meant to be. This is an action/suspense movie with a few scares here and there. I think the rest of the dark universe movies will be even better. I'm looking forward to them and it has me really excited for the franchise. I love the classic movie monsters but they are on a level of their own, works of art. I don't compare them - and they shouldn't be. You have to be able to separate them if you want to enjoy these new films.

Did you like it? Do you think I'm crazy for liking it? Tell me what you thought!

Rating: 4 out of 5
The Mummy brings another curse to theaters as military daredevil Nick Morton (Tom Cruise) uncovers Egyptian princess, Ahmanet, in what is present day Iraq. Due to the evils a deal she made to give the god of death a worthy human form could unleash, Morton must face a battle of good and evil that surrounds him before she brings the god of death to life.

Since Universal does not have any superhero movies that are continuously proving to take over the box office game, they are choosing to go a different route. Instead they are creating something called the Dark Universe where the Mummy is the first installment, which plans to bring more reboots of popular monster films such as Frankenstein, Invisible Man and the Creature from the Black Lagoon. The question is how does the unwrapping of this first film of the upcoming refurbished series hold up? The set up of the film is very captivating as it contains action and surprise elements in almost every corner. There was not a time were it felt dull because the story constantly unfolded as more and more pieces to the curse were provided and how they tied into each other. There were also several scenes that made me jump in my seat especially watching in 3D as the consequences of the curse being uncovered were seemingly brought to life through detailed CGI.

That being said, it was almost as if too much was going on. Without giving any spoilers there were areas of history that I have never seen mixed before in a film including ancient Egypt, present day Iraq and the Crusades. Somehow they were put together in a way that worked well enough during the nearly 2-hour runtime. There is also another subplot that is thrown in through Dr. Henry Jekyll (Russell Crowe) and yes he has extremely familiar characteristics of having two personalities like who you are probably thinking of. This could be part of future plans for what is to come to the Dark Universe franchise, however for what this film was it just appeared to add more fluff.

Also worth noting, I felt like this film lost the thrill of being a monster movie because it focused on too much. It was more so an action movie with sci-fi elements thrown in here and there to appease what the franchise is supposed to be. The Egyptian princess was watered down yet could have been so much more than the hieroglyph tattooed bystander she became.

The mummies also seemed to lose their mummy appeal as they took on more of zombie-like movements and noises. This could be because of Hollywood’s new love affair with all things zombies but it could also be a way to stray away from the previous versions of the Mummy movies. It did however add to the checklist feel this movie had because it was as if the director and screenwriters grabbed elements from other movies, mixed them together to try and create something “fresh” and it resulted in this bogged down product. While it is entertaining, the Mummy more so relies on the borrowing of what worked for other movies mixed with the appeal of Tom Cruise. If Universal wants to make Dark Universe into something equal or bigger than its rival superhero movies, they need to bring a more focused storyline to the table.