Screening: IN OUR HANDS - Nationwide

Mind on Movies is very excited to announce that we are working with Fathom Events to giveaway passes to the new film IN OUR HANDS at select locations on May 23rd, 2017. Select Cities Below 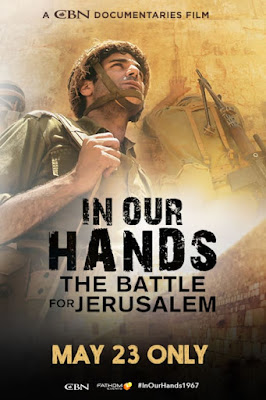 From the creators of The Hope and Made in Israel comes a CBN Documentaries Film, In Our Hands: The Battle for Jerusalem, which marks the 50th anniversary of the Six-Day War and commemorates this historic battle. For centuries, their nation had been in exile. For a generation, they had been without access to their ancestral city. For six days, surrounded by enemies, Israel stood alone … and changed history. In May of 1967, Arab nations joined together with a stated goal to wipe Israel off the map. Less than 20 years after reforming as a nation, Israel was on the verge of extinction. Yet six days in early June 1967 changed history forever.

In Our Hands tells the story of Israel’s 55th Paratrooper Brigade and how Israel’s Defense Forces risked everything for the sake of their homeland. With firsthand interviews and historical reenactments, this powerful docudrama focuses on the commitment and sacrifice of the soldiers who reunited Jerusalem. Experience an exclusive conversation with Gordon Robertson, as he discusses the significance of the Six-Day War.


Disclaimer: NO PURCHASE NECESSARY. ONE ENTRY PER PERSON. Must be 13 years of age or older to win passes. Employees of all promotional partners and their agencies are not eligible. Void where prohibited. Winners will be contacted via e-mail to receive their e-pass. Sponsors not responsible for incomplete, lost, late or misdirected entries or for failure to receive entries due to transmission or technical failures of any kind.