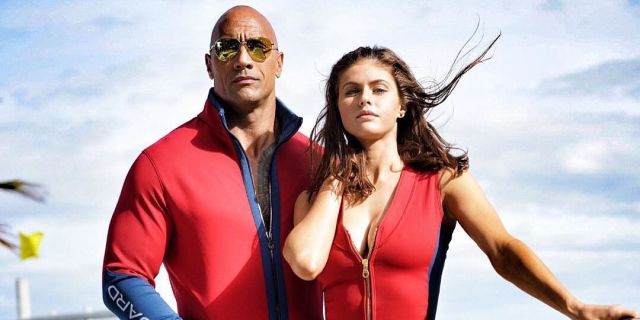 Release: May 25, 2017 | Runtime: 119 minutes | Rated: R
Summer sun, sandy beaches, and a distinct lack of clothing is resurrected in the movie version of the over-the- top 90s soap opera that cemented itself in our popular culture. Although Hasselhoff and Anderson have long since been replaced, Baywatch features all of the main characteristics we have come to expect from the series. Yet with a younger cast at the helm, will Baywatch entertain enough to be a worthwhile watch?

The Baywatch movie is a reboot of the original series starring the same characters portrayed by new actors and actresses. The film centers around larger-than- life beach lifeguards who take their lifeguarding duties very seriously. When one recruit, an infamous and unruly Olympic gold medalist in swimming, joins their lifeguarding team, the question of “you know you’re just lifeguards… right?” becomes the focus of the movie. But when a string of suspicious deaths and the discovery of drugs washing up on shore, the lifeguards take it into their own hands to fight a criminal syndicate that recently moved into the area.

Without a doubt, Baywatch is the quintessential 90s eye-rolling soap opera. It had some of the most nonsensical plotlines matched with the most ridiculous characters that really provided more in the way of eye candy than it did a comprehensible plot. And that’s precisely what we all loved so much about it. Similarly, the Baywatch movie is one of the worst pieces of cinematic history. And that’s exactly what we wanted out of it. The movie is the farcical spiritual successor to the original series that fans were clamoring for. It features lifeguards saving the world for some unknown reason with unbelievable conspiracy theories that make for some great entertainment. Baywatch is hilarious, self-aware, and delivers exactly what anyone seeing the movie should expect. There is plenty of skin, action galore, and an abundance of gags and jokes. It is precisely what a summer comedy and a reboot of Baywatch should be.

The biggest oversight in the film, however, was its distinct lack of focus on a majority of its cast. The leading ladies in the film were sadly underutilized and the movie turned into more of a Rock vs. Zac Efron battle royale than a flick with an ensemble cast. A lot of the background characters faded too much into the background and it left me pining for more screentime for these characters. Most alarmingly, the cameos that everyone was waiting for felt even more wasted. Baywatch also tried a little too hard at times at being an R-rated movie. Most of the jokes and gags were fresh and hilarious, while some just felt shoehorned in to justify its rating. Yet these complaints only make me hope that much more for a sequel.

Anyone expecting anything more than what this film delivers is woefully misguided. I appreciate that the creators didn’t try to make the film a serious version of its predecessor and that it fully embraced its hallmark traits while bringing it into the modern era. It is an entertaining, ridiculous, and mindless movie that puts a priority on enjoyability rather than art. Baywatch feels exactly like a trip to the beach – simple, fun, and fresh.

Rating: 3 out of 5
Baywatch is the film adaptation of the popular 1990s TV show. The film follows dedicated lifeguard Mitch Buchannon (Dwayne "The Rock" Johnson) as he shapes up the careless, rookie lifeguard Matt Brody (Zac Efron) along with two other new recruits to be "Bay material". Along the way the Baywatch team uncovers a local shady business plan that threatens the future of their Bay.

The opening credits are big and attention grabbing as The Rock is already going into action saving a beach goer from certain death followed by dolphins and loud music. It sets viewers up to think that this movie is going to deliver action packed epic scenes however this may have been the best part of the film.

I was let down soon after when I realized the film was like a teenager's dream of constant f-bombs and over the top vulgarities. The director took away from the sexy soap opera that was the original tv show and turned it into an outrageous comedy that wasn't all that funny. Do not get me wrong I did laugh at various times while watching but many of the jokes felt drawn out or downright inappropriate. Although I enjoy filthy humor as much the next person, this movie has multiple scenes dealing with looking at the male genitalia and it lingers to the point of being uncomfortable.

Moving over the more crime solving portions of the movie, there were several holes in the plot that I could not help but notice. The plot was also very predictable to me and as soon as certain characters were introduced I knew their role as good, bad or just plain confused. It felt like the writers couldn't find a good balance between crime and comedy so they created a weird combination that felt overstuffed especially since the runtime is 2 hours.

It is also worth noting that there are a lot of green screens used throughout the movie and it is extremely noticeable. It is as if 90% of the budget went toward getting a mostly well known and recognizable cast while the actual scenery was put on the back burner which made it hard to tell if this was supposed to be a parody or not.

In the end I feel like the film had a lot of build up prior to watching especially being backed up by such a well known franchise. The unexpected genre change from the tv show mixed with a predictable and hole-filled plot made this a washed up remake of a classic.