Review: Guardians of the Galaxy Vol 2 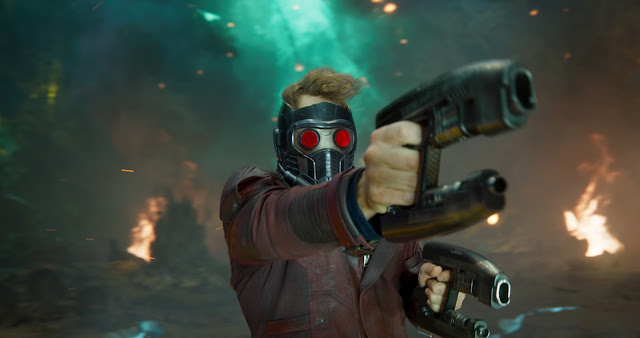 
Guardians of the Galaxy Vol. 2 is the sequel to the Vol. 1 title from 2014. Peter Quill and the guardians are back with their mismatched team and adventures when Quill's biological father unexpectedly appears in his life and they all must decide his true intentions.

The opening credits as baby Groot dances around while the Guardians of the Galaxy battle a space monster sets the tone that this film will be more comical than the first installment. This holds true throughout the length of the movie because it felt like an interesting balance between sci-fi and comedy. At times this balance leaned more towards comedy and there were several times where I felt that some of the jokes could have been left out and were overly milked.

I did like that the movie is set up as a follow-up on the timeline after discovering the "Awesome Mixtape #2" that Quill learns that his mom left him during Vol. 1. It flows very nicely from the first movie but I don't think seeing it is a deal breaker if you're on the fence of watching. Also the soundtrack is a nice way to keep things light throughout the film and adds the element of you are listening along with Quill with the Sony Walkman device.

The characters and their dynamic definitely make this movie what it is. The main characters from the first film are all back in this one plus the new characters introduced in Vol. 2 of the adventure. There were several unlikely pairs that I would have never guessed would work together and their personalities were all developed enough were it didn't feel like anything was missing. I will say that some scenes felt dragged out and repetitive though, especially toward the end of the movie.

In true Marvel style, make sure to stick around during the ending credits for extra scenes!

Rating: 4 out of 5
The rag-tag group of thieves that exploded into pop culture and saved the galaxy three years ago are back at it again. Fighting monsters, evading a massive drone armada, and… learning what it means to be a family, the Guardians of the Galaxy are taking the big screen by storm with the wise-cracking and antics we have come to expect of the team.

Tasked with protecting precious batteries for a race known as the Sovereign, this time the Guardians find themselves being relentlessly chased down by an army of drones when one of the Guardians steals some of the very precious materials they were tasked to protect. Evading the fleet, the team finds themselves crash landing on an alien planet… where our main character, Starlord, meets his long-lost father as he and the other members of the team have to learn what it means to care for someone else. Guardians of the Galaxy catapulted to the top of the box office in 2014, serving as one of the first tongue-in- cheek approaches to the superhero genre, years before Deadpool, and proved that breaking the traditional Marvel formula could actually pay off. Where the original film succeeded was in its absurd and hilarious situations as well as its vibrant characters, bringing a fresh perspective to the genre. The Sophomore film to the franchise attempts to continue this trend with even more witty banter, running gags, crazy marathon action scenes, and colorful environment.

As Volume 2 attempts to reignite our passion we had for the first film, it sometimes feels like the movie took too much time trying to relive the glory of the first film than trying to set itself apart. Volume 2’s storyline was largely an afterthought, often taking a backseat to the characterization in the film. The story lacked a tight, well-polished flow, often leaving the audience wandering aimlessly. There lacks a clear path forward, mostly because the film tries to pull us in too many different directions that just end up feeling shallow and unfocused.

That being said, it is not hard to see where Guardians of the Galaxy Volume 2 dedicated most of their effort. Despite the lack of a compelling plot, it has a strong emphasis on carrying forward the feelings we got from the original. Everything you loved from the first film – the characters, the tight dialogue, the absurd situations, the music – it’s all still there! Volume 2 is the very definition of a fun, entertaining film. The movie keeps the bright, campy, upbeat color scheme and soundtrack of its predecessor which has become a staple to the films. But especially impressive is the movie’s characterization. Every character remains intact and they somehow manage to avoid becoming tired and played out. As a result, for most of the movie I found myself not really caring that there wasn’t a great plot. All the characters were fun and hilarious and that was more than entertaining enough to carry the film. There are some great action scenes (the awkward CGI at the end notwithstanding) and the movie just feels action-packed and fun. The entire theater was laughing in almost every scene and the movie hits the mark just right. I left the film satisfied and grateful for another journey with the Guardians.

Guardians of the Galaxy Volume 2 continues to feel fresh and different from any other franchise, a testament to Disney’s ability to keep each one so distinct. Volume 2 did not quite meet or exceed the high standard of the original, but it still holds its own and is one of the better comic book Sophomore films yet released. Fans of the original will not be disappointed and the film serves as a great movie for every audience to have fun, jump into the action, and build the hype for Volume 3.