Mind on Movies is very excited to announce that we are working with Universal on the upcoming Blu-ray release of FIFTY SHADES DARKER. 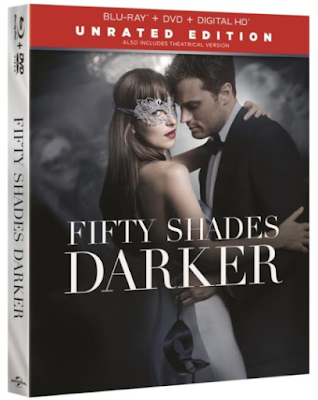 When a wounded Christian Grey (Jamie Dornan, “The Fall,” Anthropoid) tries to entice a cautious Anastasia Steele (Dakota Johnson, How to Be Single, Black Mass) back into his life, she demands a new arrangement before she will give him another chance. As the two begin to build trust and find stability, shadowy figures from Christian’s past start to circle the couple. Jack Hyde (Eric Johnson, “The Knick,” “Smallville”) and Elena Lincoln (Kim Basinger, L.A. Confidential, 9 ½ Weeks) intensify the story, determined to destroy the couple’s hopes for a future together.

In addition to both the original theatrical version and a steamy new unrated version with over 13 minutes of footage not seen in theaters, Fifty Shades Darker Unrated Edition on 4K Ultra HD, Blu-ray™, DVD and Digital HD comes with more than 30 minutes of never-before-seen bonus content, including cast interviews, behind-the-scenes features, and a peek at what lies ahead in the upcoming Fifty Shades Freed!

FIFTY SHADES DARKER releases on Bluray and DVD on May 9th 2017!
#FiftyShadesDarker


Subscribe Here to join Mind on Movies Email List.
Disclaimer: Only one entry per mailing address per giveaway. The prize will be sent via FedEx or UPS. No P.O. Boxes please. This contest is from Mind on Movies working with Universal. The entries will be checked. You must do what it says on the widget option to win.
Posted: May 09, 2017
Labels: Expired Contests
Newer Post Older Post
Subscribe to: Post Comments (Atom)
Subscribe to Mind on Movies for Movie Screenings and Giveaways.