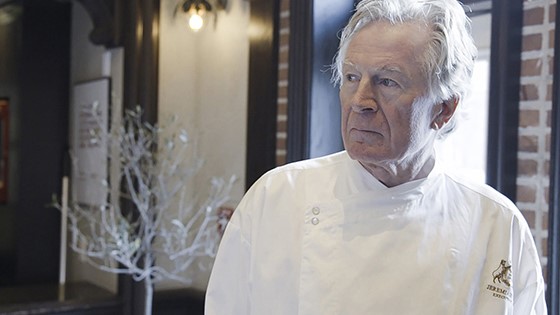 
Jeremiah Tower was born in a very broken home, with an abusive father, and an alcoholic mother. Being blessed with wealth, Jeremiah spent the majority of his childhood traveling, but had a lack in love in his life. Young Tower was left alone on most of the cruises. While his parents were partying, he resorted to trying everything in the fine dining halls. Going to food to cope with his loneliness, Jeremiah slowly developed a passion for food which eventually leads to him becoming one of the most influential chefs of modern day.

This CNN produced biographical documentary explores the underrecognized life of Jeremiah Tower as he creates the modern American cuisine. The film wonderfully shows how Jeremiah dealt with the neglection of his parents. It also shows how he got into the food industry, slowly crawling his way to the top. Starting at a local restaurant with friends to owning “Stars” his own franchise. Another highlight of the film is his relationships with his friends. Jeremiah Tower performed well on screen as well as his supporting cast. As a whole the documentary is very entertaining, as well as educational.

There is very little to critique with the film, but the film does drag on a little. It also could have spent more time dealing with his sexuality. The topic was under addressed but left ends open. Also the documentary seems to be filtered by Jeremiah, only discussing what he wants to be discussed. Besides from those few flaws the film thrives.

Overall Jeremiah Tower: The Last Magnificent is a provoking documentary, keeping the viewers highly engaged. It has a few flaws, but it is maked up by all of the entertaining topics that are brought up. I would recommend this film to all food junkies and anyone who wants to hear the unrecognized story of the most influential chef in modern American history

Rating: 3.5 out of 5
Jeremiah Tower: The Last Magnificent tries to make become a chief cool.
Something this movie does do, is it brings light to a story I have never heard of, maybe this is because I'm not a 'foodie' or maybe it's because I would rather just eat the food then study, who knows.

This movie is brought to you by CNN. So don't get upset when you see this movie and it's in a documentary format. Although they have real action scenes, for the most part, this is a documentary about Jeremiah Tower, and the story of his cooking career.

Not only does Anthony Bourdain star in this movie, he is a producer of it too. Anthony Bourdain has stared in many different shows about traveling the world and trying new foods. So he for sure has good judgement on what is good and what is not. A surprise face to see here was Martha Stewart. I'm a fan of Martha Stewart, she made her mistake, let's move on from that and still give her the credit she has when it comes to cooking and home decor.

Do not watch this movie on an empty stomach. You will find yourself sad at how hungry you become while you watch this film.