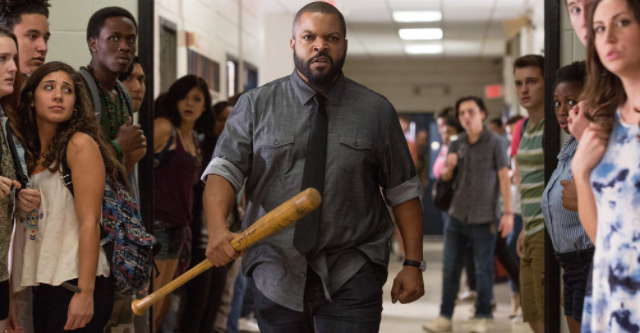 Fist Fight was that movie that I thought Ice Cube would want us to compare to Ride Along, but please don't go in this movie thinking that. After about five minutes, you can tell what the issue is with this movie, its Charlie Day. Now I'm not saying he's abad actor, or that he doesn't provide enough attitude to bring nice guy teacher to the screen. I just feel like Charlie Day is only good when he's behind a better, strong comedian.

At this movie, maybe you can comment one below, I can't think of a movie Charlie Day has done that he was the lead actor. In Horrible Bosses or It's Always Sunny he's always with a much more successful actor who has proven themselves as funny.

Ice Cube didn't really have a role in this movie, despite the picture used above. He barely has that many lines in the movie.He was an under used part that they could have ran home with.

Now I will say that the last 20 minutes, or so, of the movie was probably the funniest parts. When Charlie Day started to go crazy, I went crazy into laughter. If they could have just fast forward to that part, I think this movie would have been so much more funnier.

Even some of the pranks the students did to the teachers, though crazy and something I don't think would really happen, was crazy funny.

Tracey Morgan is a nice sight in to see in this movie, since we haven't really seen him since his accident.

So be prepared to laugh for a few minutes during the movie at the pranks, and then again at the end of the movie.
Nothing in between.