Is A Monster Calls enough to call you to the theater? 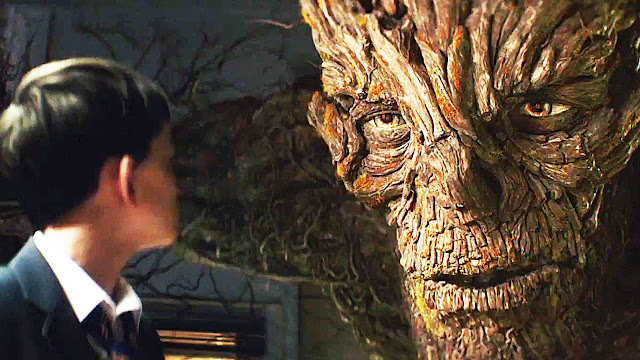 While a child suffers through his mother’s fight with cancer, a monster appears in the middle of the night to share three stories to impart wisdom on how to overcome the boy’s greatest obstacles. But are these stories enough to help us overcome the increasing price of movie tickets to actually go out and watch the film?

A Monster Calls drops us into the life of a young boy as his mother is fighting a tough battle with cancer. The boy has to grapple with bullies, adjusting to the idea of moving in with his grandmother, and understanding what his life would be like if his mother lost her fight. His greatest fears manifest themselves in a recurring nightmare where the earth opens up and tries to swallow his mother, leaving him holding onto her for dear life so she doesn’t fall into the gaping chasm below. One night, the tree in the local cemetery wakes up and rises up, revealing itself as a giant monster. It comes to him in a dream, telling him that it will visit him every night at the same time to tell him three stories, and on the fourth night, the boy would have to tell the monster his own story about his greatest fear and his nightmare. These stories translate into life lessons on how to handle the difficulties in his life.

Coping with the potential death of your closest and most beloved relative is a difficult subject to broach. Yet this movie masterfully handles its dark subject matter in an innovative way. The film puts us in the mind of a child, seeing the world as he would and understanding such difficult topics in the way a child would. It allows us a different perspective on a subject we have seen portrayed many times. Most importantly, the film does not shy away from the dark and depressing nature of the subject matter. This is not a lighthearted film in the slightest. Yet it is handled so well, it makes the entire journey worth it.

A Monster Calls is truly a creative journey. I felt like I was simultaneously inside a children’s storybook and a grim novel. Although it is dark and difficult, it is at the same time truly magical and immersive. The film pulls you in, makes you care, and awakens some of that childhood wonder and sense of the world that is hidden away inside us. Additionally, I cannot express how beautiful the film was. The animation was superb and the monster itself was also remarkably well done. The entire cast was phenomenal as well, and truly brought their characters to life. Liam Neeson in particular was a great fit as the monster. All of these elements seamlessly come together to create a compelling but bleak story. The way the movie blends the fantasy and realistic aspects helps guide us through some very important lessons, which culminate a truly heartbreaking ending realization.

I have to be honest, as someone who adores Pan’s Labyrinth and The Orphange (which is by the same director), I eat these types of movies up. But I have to say that A Monster Calls is a step above most of the competition. It’s a wonderful, charming film that truly brings magic to the big screen. It is a tear- jerker, but I don’t think it is gratuitously so. Although the movie may not introduce new stories or revelations, it handles them in a creative, wonderful way. If you love a good, sappy tear-jerker, you will not regret seeing this film.

Nothing! I only wish there had been more animated scenes, or even a feature-length movie just with the animation in this film.
Additionally, although I personally didn’t catch it, there were hints about who the Monster was supposed to be a little too early on in the film. Pictures of Liam Neeson can be seen in the house in the middle of the film, revealing to viewers that the monster is actually the grandfather, a revelation that is not fully explored until the end of the film. These hints, although small, would have been better saved for the very end to try to keep the element of surprise.
_________________________________________
Posted: January 06, 2017
Labels: JonathanJimenez17, Reviews17
Newer Post Older Post
Subscribe to: Post Comments (Atom)
Subscribe to Mind on Movies for Movie Screenings and Giveaways.